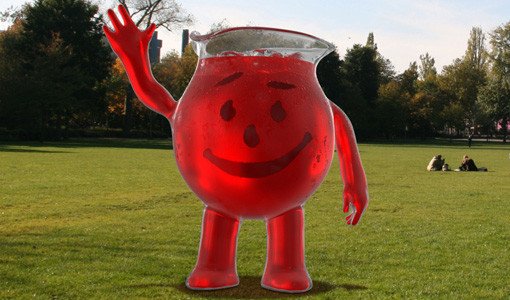 The folks at Kraft Foods have given the Kool-Aid Man a digital makeover. It’s the bulbous pitcher’s biggest change since 2000, and his seventh since his 1954 debut. Aside from the obvious tweaks — he’s leaner, he’s no longer wearing clothing, and at least in the above picture, he’s not being a total dick and blasting through the wall of some poor family’s living room — the minds behind the Kool-Aid made have made other, more subtler changes.

1. Instead of always being red, he’ll continually change colors to be as ethnically inclusive as possible.

2. He’ll subscribe to the Atlantic instead of the New Yorker.

5. He’ll roll his own cigarettes.

6. He’ll start paying all that back child support he owes.

9. He’ll do what it takes to get those six-pack abs!

10. He’ll now allow only sustainably farmed butylated hydroxyanisole to be used in the production of him.