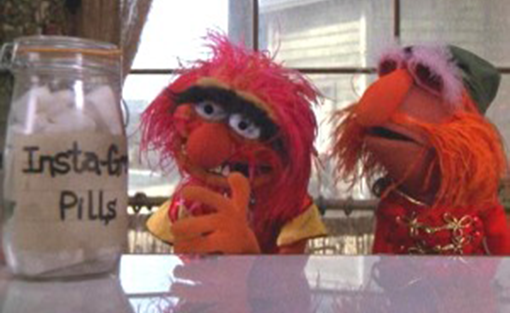 Which Of These Movie Pills Would You Take?

If we know of a pill that was guaranteed to make us stronger, smarter, or more handsome and it didn’t come with side effects like bacne or the crazy stink-eye, we’d probably give it a shot. Sadly, pills come with a price, and lots of movies have spent lots of time rubbing it in our faces. Dicks.

Also: How to get rid of bacne

“These pills all continue to play on the fanciful wishes for a magic solution to the age old search for intelligence, strength, tranquility, creativity, and sexual prowess,” says Dr. Marc Leavey, of Mercy Medical Center in Maryland, and gatekeeper of his own blog: A String of Medical Pearls. “Ultimately, the common theme in the various pills and potions created for the film fantasies is that of enhancing brainpower or entering an alternate reality. In that regard, they represent extensions of some popular prescription and illicit drugs into a creative parallel universe.”

So Doc Leavey thinks all those fake movie pills can usually be likened to real-life goodies. But which ones are which? Let’s get to trippin’! Er, we mean — say no to drugs and stay in school, kids.

NZT | Limitless (2011)
A down-on-his-luck writer (read: all writers) played by Bradley Cooper gets a taste of this mysterious clear pill, which causes him to become a genius in the intellectual, physical, and bad-guy-pissing-off senses.

Doc Leavey Says: “NZT, the pill which ‘unlocks’ your brain and makes you more insightful, creative, and predictive, most clearly suggests a very old class of drugs — amphetamines. From the ‘Benny” of World War II days through more recent iterations, including prescribed variations such as Adderall and Vyvanse, are all used to produce just those kinds of effects. And like the mythical NZT, they are quite addictive and have profound withdrawal symptoms.”