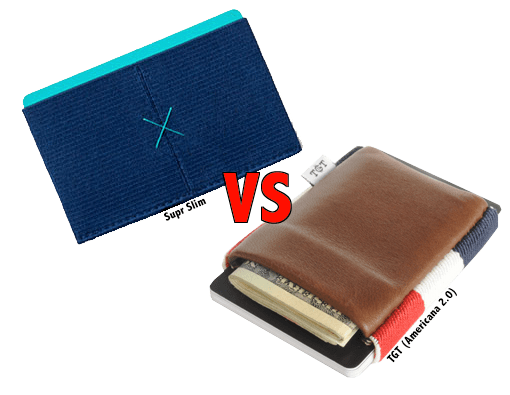 Since most guys who aren’t filthy hobos carry wallets, the question comes down to which wallet is A) stylish, B) affordable, and C) won’t make them look like they’re carrying a load in their back pocket. For us, that means ditching bulky billfolds for minimalist wallets like Supr Slim wallet ($25 @ Amazon.com) and the TGT wallet ($34 @ Amazon.com). Both are great options, and here’s how they stack up …

HOW SUPR and TGT WALLETS ARE SIMILAR
• They’re made in the USA! USA! USA!

• Each adds a unique sense of style to your, uh, style.

HOW SUPR and TGT WALLETS DIFFER
• The Supr Slim wallet is a sliver of elastic; truly as minimalist as it gets.

• The TGT has an extra Italian leather pocket for cash, expanding the wallet’s dimensions.

• In terms of accessibility, either end of your card is available using the TGT wallet, but the Supr Slim fits your cards in vertically and its bottom is closed, leaving only the top exposed, making it more difficult to maneuver your cards.

WHICH IS RIGHT FOR YOU?
What are we, you parents? That’s one you. However, here’s a way to gauge which would come in handy in certain circumstances:

• Never carry cash? The Supr Slim is your go-to. You won’t carry much, which means you’ll have less to drop after your sixth Irish Car Bomb.

• Carry some cash? TGT is your stop. It also has more flash, which is more likely to catch a date’s eye when you’re pulling out your wallet just before you ask her to split the tab.

Also: Learn how to make an Irish Car Bomb

SO WHICH IS BETTER?
Haven’t you been reading? How the hell can we tell you that. One of our editors carries cash at all times — he’s older, wiser, and slightly better looking than the other editor who never carries cash; the cash carrier sides with TGT. However, the cashless padawan swears by the Supr and says he’s consistently getting compliments on it. It comes down to preference, so we can’t tell you which wallet is better in the same way we can’t tell you dark beer is better than pilsner.