When Nathan Anderson was in his early 20s, he hit upon a terrific method for picking up women. He didn’t necessarily invent the approach; guys sometimes joke about using the method, but few actually try it in real life — at least, not successfully. But it immediately worked for Nathan, and led to him becoming a secret weapon responsible for constantly getting him and his friends invited to hang out with groups of beautiful women at bars and clubs. And yes, it got him laid a lot too.

The method? Pretending he was gay.

Cut to several years later, when Nathan decided to write, direct, produce, and star in a movie based on his exploits. Nathan had acted before, but he was not a writer, director, or producer. He also didn’t have any rich friends or family members to give him the hundreds of thousands of dollars he needed to make the film he wanted to make. So how the hell did he do it? (The movie is finished, but he’s in the midst of a Kickstarter campaign to secure a marketing budget.) We asked him.

What made you think you could write/produce/direct/act in your own film?
For me it was a situation born out of necessity. I would have loved for some studio to hire me as an actor in one of their movies. I am not a very patient person and when faced with the thought of auditioning for years, I decided to try another approach. I approached a mentor of mine who had just begun producing, and volunteered to work for free as an assistant. I played poker for about a year to make ends meet while I learned the art of film financing. One evening while discussing my future goals with my then boss, he said, “Nathan, if you want to be an actor so badly, why don’t you learn how to be a producer? You can make your own film and put yourself in it.” That sounded like a good plan.

So, how many people told you you were crazy?
Just about everyone in my life. But my close friends and family were very supportive — to them, crazy was nothing new for me.

How did you raise the money to film the movie?
I knew that I did not have a friend in the financial situation to give me the full budget for the film. So I decided to set up a model in which I could raise the budget from multiple investors. The investors are close friends of mine and a few business contacts who have become my friends.

And you were still raising money for filming while you were filming?
That is the craziest part — the raw faith and ignorance that if we set a goal and stuck to it things would fall into place. I can remember on a daily basis juggling between acting out the ridiculous scenes, solving problems on set, and jumping on calls to prospective investors trying to get the rest of the funding. It came within hours of disaster on more than one occasion, but it always worked out just in time. 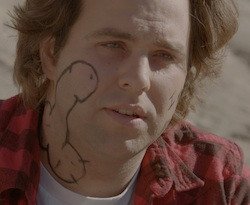 Was it always part of the plan to crowd fund the marketing campaign?
I really hadn’t thought about crowd funding until we were in post production. The plan was always to do something non-traditional throughout the entire filmmaking process. Following rules has always slowed me down and I think if you look at people who are successful, most of the time you will find that they do not follow conventional wisdom. This film was made off of people wanting to see it succeed. Crowd funding the marketing just made sense.

How’s the campaign going so far?
It’s going good. I knew the biggest struggle would be getting the word out to people to make them aware of what we are doing — you almost need a marketing campaign for the marketing campaign. I know if we can get the word out and people see the film trailer, the support will happen. I have been emailing non-stop trying to reach anyone I can.

How did you go about making a movie that looks like it cost far more than it actually cost?
I outsourced everything to China. No, I have always been thrifty. I grew up in a family that looked for deals and bargains. We never really had money, but we never went without. When I worked on a big-budget film, I saw the sheer waste of money. The fact is if your mother gave you $5 to buy a toy you didn’t get a $2 toy. You spent every penny. The same is true with big-budget filmmaking. I wasn’t about to let a lack of money stand in the way of making the film I saw in my head. I got used to hearing “Nathan, that can’t be done the budget has to go up if you want that.” My reply was always, “Bet me.”

Did you have to call in a lot of favors?
I am still calling in favors.

What was the biggest disaster that happened while you were filming?
Let’s just say that there was a discrepancy one night about who actually owned the club in which we were filming — in other words, about who we should have paid to film there. A scuffle ensued that involved pepper spray, which spread rapidly throughout the building, resulting in 60 extras franticly running out of the club and into the street. The police and fire department even showed up. The night ended with myself being put in the back of blacked-out Range Rover with some guy I affectionately called Pimp Daddy G and his two big thugs, asking me what my film was about and how much money I owed them. This all happened while I was in costume — Spandex and makeup.

What happens if you don’t meet your fundraising goal?
We will find a way to win.

Click here to help Nathan fund his film on Kickstarter.