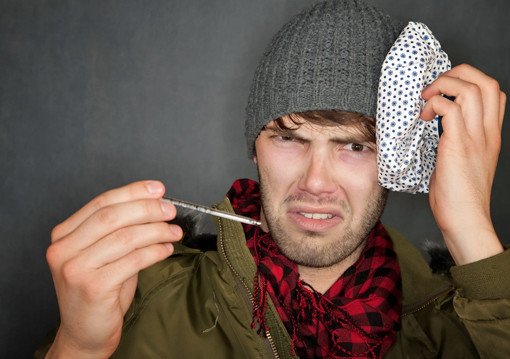 This is a sponsored post, on behalf of Robitussin.

Going outside with wet hair won’t cause you to catch a cold. That, sadly, means your mom was a filthy liar. Truth is, cold and flu viruses enter the body through the nose and mouth. Mom’s heart was in the right place, though. She was only trying to shield you from the awful symptoms that come with a fierce cold or flu — cough, sore throat, nasal congestion, watery eyes, fever, and an overall achy feeling that makes moving one millimeter akin to hiking Kilimanjaro in bare feet.

There are more than 200 viruses that cause the common cold. In other words, you can’t avoid them. Instead, focus your efforts on suppressing the symptoms as soon as they appear — doing so could mean the difference between chatting up Santa’s daughter at your company holiday party and being bedridden under a blanket of used tissues.

Enter Robitussin, a trusted brand that’s offered OTC solutions to keep the, ahem, COUGHequences of cold and flu symptoms at bay for more than 50 years:

Now that you’re schooled on Robitussin, check out these six surprising facts about what it’s used to treat:

1. A cough can leave the body at speeds up to 500 miles per hour; that’s twice the top speed of a racecar.

2. Cold symptoms manifest themselves two to three days after infection and can last up to two weeks; you’re most contagious from the second to fourth day of infection.

3. A review of 27 studies that was published in the Clinical Infectious Disease found that soaps containing the anti-bacterial ingredient triclosan were no more effective than plain soap and water at removing bacteria or slowing the spread of disease.

4. A cold is spread roughly five times faster when flying in an airplane. Time to contemplate pulling the trigger on that jetpack you’ve always wanted.

5. People who sleep less than seven hours per night are three times more likely to catch a cold, according to a 2009 study.

The overall theme? It’s easy to catch a cold or the flu, and doing so can make life miserable if you’re unprepared. Also, allowing the symptoms to go untreated will make life even more, um, miserabler.

Exactly how bad can things get? The folks at Robitussin have outlined it here COUGHequences. And as an added bonus, they’re offering prizes — including a $10,000 trip for two — simply for watching some of their COUGHequences videos. That’s sick, right? Sorry, poor choice of words …