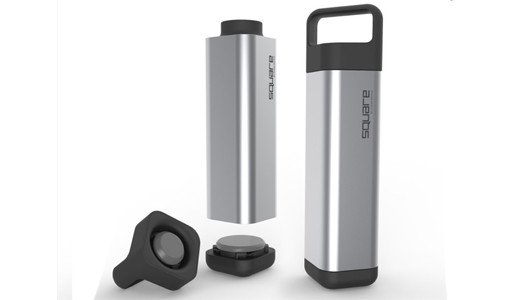 Unless you are in Mexico or the fracking near your house has caused your ground water to become literally flammable, you should not be drinking bottled water. It’s by and large just tap water put through a household water filter, then poured into a plastic bottle — a gazillion of which are currently floating in the ocean killing dolphins and whatnot — and sold to complete suckers for several dollars.

What should you do? Well, you’ll save tons of money and contribute slightly less garbage to the world’s ample supply of garbage by using a reusable water bottle. And you’ll look cool doing it if you use the Square. It’s designed in part by former Apple engineers, and while we’re not saying that automatically makes it awesome, this bottle really is pretty awesome. For starters, the Square is, uh, square. That means that if you drop it or lay the 20 oz. bottle on its side, it won’t roll away. In addition, the bottom twists off just like the top — they’re both held in place by ingenious “bayonet” locks instead of threads — for easy washing (they’re dishwasher-safe), and the BPA-free bottles fit easily in most every cup holder.

We like the Square so much that we asked the makers if we could give five away to ModernMan readers. They said yes. To win one, just follow these three steps:

Step 2. In the comments section of this story (below), answer this question: Who is your favorite “square” (i.e., nerdy) character from movies or TV, and why?