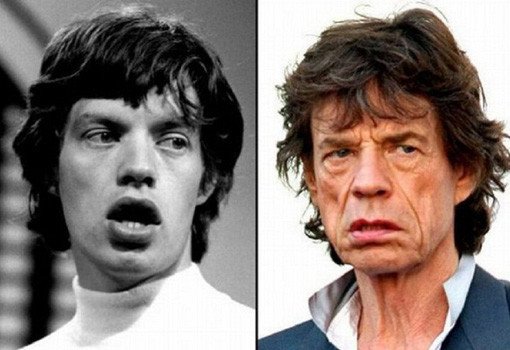 Terrorism, nuclear proliferation, dub step music — maybe it’s a good thing we’re only on Earth for 75 years (give or take). Still, you’re pretty lucky if you die of old age. No one wants to be wrinkled, stooped, slow, nostalgic for crappy stuff from a long time ago, way too eager to chat with check-out people when there’s a long line behind you, unable to get through metal detectors on the first try, and a slow-moving terror on the roadways. But it sure beats tripping over the cat and breaking your neck on the coffee table when you’re 25.

Also: The Science of Getting Drunk

Considering how hard most people fight against aging, chances are most people don’t have any idea of what it actually is. Why do you get wrinkles? Why does your eyesight deteriorate? Why do those damned kids always walk on your lawn? Even scientists don’t have all the answers — but they have more and more. And their research could one day make aging a thing of the past. Sadly, you’ll probably be dead by then. But in the meantime, there are very real things you can do to slow down the aging process. First things first …

WHAT IS AGING?
Hearing, flexibility, height loss; muscle and bone depletion; slowing metabolism; slower reaction times; memory loss; hearing, smell, and vision deterioration; kidney, heart, and immune function failure; inflammation; farsightedness. These are the things that happen to you as you age … and are also arguably reasons to kill yourself by age 40 or so.

Life is a continuous cycle of cell division: Bodily tissue is grown and repaired by transferring DNA information from old and sometimes damaged cells into fresh new cells. That information is stored in chromosomes. And much like cocaine is cut and therefore degraded every time it changes hands on its way from a Central American jungle to the nostrils of someone who’s about to start acting like a complete asshole, chromosomes lose a little bit of their length every time a cell divides.

This is bad. Buffering the ends of each chromosome are caps called telomeres, which try to mitigate that loss. But even those erode until you eventually start leaking data. And the fresh new cells aren’t so fresh anymore. Instead, they start out damaged or just plain wrong. The result? Stuff like arthritis, compromised immunity levels, and complaints about dubstep music.

The end of a cell’s ability to reproduce is called senescence, and before scientists decoded the human genome a decade ago, it meant your ass. But thanks to studies of duck penises and otter penises and alligator penises, researchers are hypothesizing ways to prolong it.