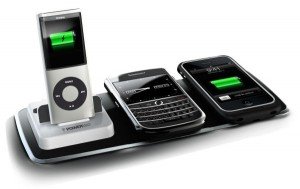 Wireless Powermat 3X with Powercube ($100)
Since there’s no electronic equivalent to Willy Wonka’s Everlasting Gobstopper, we’re stuck having to charge stuff when the battery drains. That puts us on a the prowl for outlets when we’re out and about and our gadget starts running out of juice. Rid yourself of that worry with the sleek wireless Powermat 3X charging mat and Powercube Universal Receiver. The mat charges up to three devices at once, and its eight interchangeable tips (mini and micro USB, Apple, Samsung, Nintendo DSI, Nintendo DI Lite, Sony PSP) make it compatible with hundreds of gadgets. As long as your phone or machine is resting on the mat, your device will remain charged — but it won’t get overcharged. An automatic shut-off mechanism kicks in when the battery is full, which helps prolong the battery life.

5 Mobile Trends That Are Dominating in 2021 & Beyond

Despite being a basic garment, most men fail to know how to combine them. Five different ways...

Male Expression of Anger and How to Manage

Why Should You Love Your Friends?