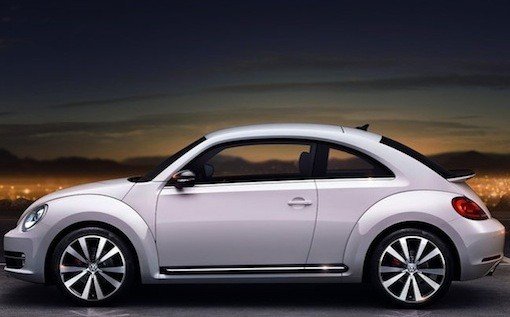 I’m in Berlin when the good volks at Volkswagen give me the keys to a new 2012 Beetle and suggest I take it for a spin in the German countryside. Their only request? That I be back in time for dinner. I joke that dinner would probably involve schnitzel … and it does, in fact, end up involving schnitzel.

Which is a fittingly manly meal (for the uninitiated, schnitzel is fried, breaded meat) considering how much more masculine the all-new Beetle is. In fact, it’s much improved in pretty much every way from the last generation Beetle, which VW stopped producing in 2010. This Bug is about 6 inches longer, 3.3 inches wider, and about a half an inch lower. VW also extended the track and wheelbase, all of which adds up to a smoother and more sportif ride that I feel from the moment I mash the pedal.

Volkswagen only has turbo versions of the Beetle for me to test, which I manage to suffer through. I love the 2.0-liter turbocharged I-4, which churns out 200 hp and 207 lb.-ft. torque and makes the car feel very GTI-like. The front-wheel drive Bug comes with either a six-speed DSG (dual-clutch transmission) or a six-speed manual. (My recommendation? The DSG.) There’s also a less expensive 2.5-liter I-5 with 170 hp and 177 lb.-ft. of torque, and next year there’ll be a 2.0-liter turbo-diesel that I’ll be eager to drive.

Lookswise, the newly masculine Beetle is reminiscent of a chopped and channeled version of the 1970s Super Beetle. Or, it’s what would happen if a Chrysler 300C made love to a 2007 Bug. (That’s a compliment, we promise.) The hood and roofline are wider — the longer roofline gives the Beetle almost half an inch more rear-seat headroom — and both help make the Bug look more firmly planted on the ground. There are nearly two more inches of legroom and 2.5 more inches of shoulder room up front. One thing that particularly impresses me is, oddly, how big the doors are, with just the right amount of oomph when I slam them.

The interior is not just bigger, it’s more refined, and makes me think of a top-end Golf when I climb in. Gone are the ladies’ touches, like the cutesy vase, to be replaced with harder lines and better plastics. I especially like the extra glove box integrated into the dashboard — called the kaeferfach or “Beetle bin” — which harkens back to the Type 1 Beetle. So yes, the 2012 Beetle, which starts at $19,765, is still a Beetle. It’s just better and manlier.