You’ve no doubt been unable to avoid the incessant talk about the year’s biggest news story: The royal baby!!!!!1! The latest important update is that the Duke and Duchess of Cambridge — Kate Middleton and Prince William — have named their baby George Alexander Louis, aka, Prince George of Cambridge.

Those names seem fine. Some people have pointed out that they all have a Seinfeld connection (Jason Alexander played George Louis Costanza), but other than that, they’ve gotten pretty good reviews. But the fact is, royals with the names George, Alexander, or Louis haven’t always fared real well throughout history. In fact, they’re a collection of quitters, crazies, prisoners, and guys with terrible haircuts. 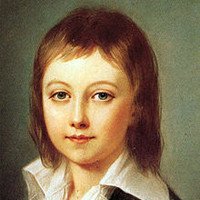 LOUIS XVI OF FRANCE (1785-1795)
Known as Louis-Charles, Prince Royal of France, his parents were executed for treason. As if that wasn’t bad enough, Lou was imprisoned at age 7 until his death at age of 10. He never ruled or was officially named the king. And worst of all, he had a girl’s haircut. KING GEORGE III OF THE UNITED KINGDOM (1738-1820)
He commanded one of the greatest fighting forces the world had ever seen, and yet managed to lose a war against a small number of misfits with crazy ideas about government and religion. (We mean the United States, genius.) In the process, he lost what would have been the most profitable colony in the British empire. Oh, also, he went blind (that explains the hat), he went crazy, and he gave the world … GEORGE IV OF THE UNITED KINGDOM (1762-1830)
He was loathed for his laziness, gluttony, and inept leadership during times of war and crisis. (He also married his cousin, which is messed up, but we can’t fault him for that since basically every royal did that.) The Duke of Wellington had, ahem, beef with King George IV, and regarded him as, “the worst man he ever fell in with his whole life, the most selfish, the most false, the most ill-natured, the most entirely without one redeeming quality.” LOUIS ANTOINE, DUKE OF ANGOULEME (1775-1844)
It’s bad enough the guy was a duke of a place nobody could pronounce, but he also reigned as king of France for a whopping 20 minutes before advocating the throne. Quitter. PRINCE ALEXANDER OF BULGARIA (1857-1893)
Shortly after being named governor of Eastern Rumelia — which was apparently a real place and not a phony location in a Timothy Dalton-era James Bond movie — the military staged a coup and forced Alex and his beard out of Bulgaria. If King Leonidas from 300 can basically wipe out an entire army, why couldn’t you, Alex? KING GEORGE VI (1895-1952)
Not only did the British empire slide into decline under George VI’s watch, but his uncontrollable stammer made him nearly piss himself at the mere thought of public speaking. The whole story was covered in the 2010 film The King’s Speech, which won Best Picture over Inception, True Grit, and The Social Network. Will his reign of terror never end?!