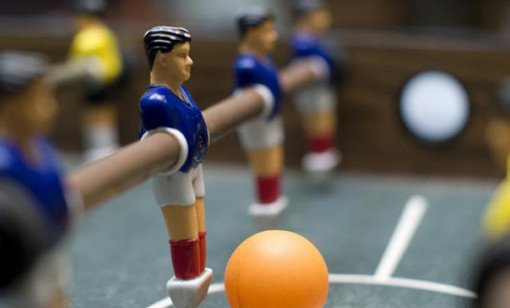 Foosball Tips That’ll Make You Look Like A Pro

The origins of foosball trace back to ancient times. Well, actually 1921, when it was invented soccer fan Harold Thornton, who mapped out the details using a box of matches. Since then, foosball has become a staple in everything from sports bars to man caves. Here’s a quick guide to running up the score on your bros…

Basically, rather than smashing the ball head on, use the corner of the player’s feet to ricochet angled passes and shots on goal. These shots are more difficult for goalies to stop, and can also be set up in combination, even using the wall to bank the ball.

Instead, always angle your goalie and at least one defender in the position to block a shot. Creating this extra barrier between the ball and your goal will reduce your humiliation, and by statistically eliminating those embarrassing goalie-to-goal, across the table scores.

It sounds like a no-brainer, but most players are happy just swiveling the handles top speed and letting fate guide the ball. Instead, use short, controlled passes between your players to reduce the amount of time your opponent can affect the ball. If he can’t touch it, he can’t score, right?

Don’t Slide The Goalie Back And Forth

Instinct tells us that we should slide the goalie back and forth like a little ADD Tim Howard. Not the case. Instead, methodically position the goalie just off center in relation to the ball. You don’t need the entire figure to stop a shot – his little cleats are more than enough to deflect – so keeping your position flexible will allow you to cover more ground.