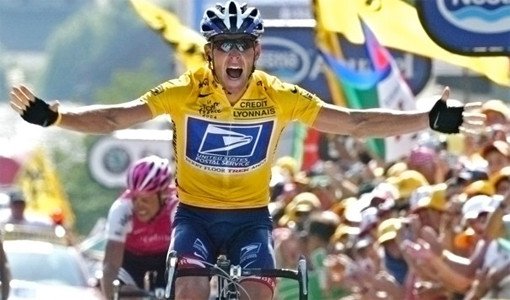 Lance Armstrong never officially tested positive for performance-enhancing drugs during his seven Tour de France victories. However, former teammates were willing to go on record saying he was doping, and the U.S. Anti-Doping Agency (USDAD) seemed hellbent on proving it. Thing is, they won’t have to; Armstrong has announced that he’s had enough of trying to fight the accusations, and is … giving up?

Yep, that’s right — the guy who beat nut cancer and then went on to win what is arguably the most grueling athletic event in the world seven straight times is giving up.

What did USDAD and his teammates have on him? What was so damning that it’d make Armstrong give up his fight, even though he maintains his innocence? After an exhaustive investigation encompassing more than a decade of Armstrong’s career, we’ve found out, and none of it has to do with cycling …

1996: Promised his trainer he’d soak his legs in an ice bath. Took a luxurious bubble bath instead.

1997: Told a date that he really enjoyed The Bridges of Madison County when really, he’d only read the Cliff’s Notes.

1998: Claimed he left a 15 percent tip at lunch when it was actually more like 13 percent

1999: When a friend called, told him he was busy but that he’d call him back “in five minutes.” Didn’t call him back for two days.

2000: Voted by absentee ballot in the presidential election even though he had plenty of free time on Election Day.

2001: Used a “sneak attack” during a thumb wrestling match.

2002: Placed a paper bag over a working parking meter so he could park for free.

2003: Shouted “OH MY GOD, WHAT’S THAT OVER THERE?!” and when his 8-year-old nephew turned to look, rearranged the checkers on the board to give him a far better chance to win the game.

2004: Failed to tell Sheryl Crow he’d popped a … performance enhancing drug prior to a lovemaking session.

2005: Swore he had “never seen a second” of Britney & Kevin: Chaotic when he’d recorded and watched every episode.

2006: Was elated he’d never have to wear a yellow jersey again because he secretly thought yellow clothing made him look washed-out.

2010: While playing bar trivia, couldn’t remember the name of the man whose assassination sparked World War I even when given the additional clue that a popular band was named after the man. Used his phone to get the answer.

The 2021 Guide on How to Become a Dental Assistant

Why you should consider gambling with Ethereum over Bitcoin

The rivalry between these two top cryptocurrencies has transcended beyond the cryptocurrency community into the online casino...

Catamaran: The Best Way To Sail Around the Ocean

Different Discussions To Have if You Want Your Relationship To Survive