Carlos Andrés Gómez is a poet, actor, playwright, fairly tall gentleman with a beaming smile, and author of Man Up: Reimagining Modern Manhood ($13 @ Amazon.com). He’s also a guy who spends ample time in the shower thinking and conjuring up ideas.

“When Axe reached out about participating in their Shower Thoughts video series they told me that 78 percent of guys in their survey said that they do their clearest, most dynamic, thinking in the shower,” Gómez recalls. “Our world is so nonstop and time is becoming more and more micromanaged that you hardly have time to breathe. For me, the shower is  the place that I can finally take a breath. It’s where I think about poems, projects, [and] things I want to work on.”

Gómez’s use of quiet time in the shower demonstrates why, at 34, he’s become such a success; and MM’s editors’ shower thoughts say a lot about us, too. Here are a few …

Dude, please tell me that’s not cellulite!
What’s the cutoff for a small penis and a micropenis?
Is “retro” the same as “old school”?
Finger I dislike most: ring finger.
Why doesn’t my phone have a built-in projector?
When soap goes into your urethra and burns like hell, is that what it’s like to have syphilis?

Anyway, Gómez has a point; the shower really has become one of few places we’re left alone. Most of us disturbingly lug our smartphones into the bathroom; they’re on us when we work out in the gym, hang out with our friends, at meetings, etc. They’re, like, totally part of us, man. And we should learn to detach from them more often than just the shower. Along with promoting bad posture, a new study published in the journal Hippocampus also found that sitting quietly helps you remember more things. From mentaltalfloss.com:

In the study, 40 volunteers were asked to explore a virtual reality environment, learning a specific route through the virtual world. Afterward, they either spent 10 minutes sitting in a dimly lit room, letting their minds wander without any distractions, or they spent 10 minutes on an unrelated task. Those who rested quietly performed better when tested later on their knowledge of the virtual environment. In fact, they were able to point out landmarks in the world from various places 10 percent better than the control group.

That being said, quiet time is crucial to creativity and efficiency. So we thought the idea of Axe’s Shower Thoughts was cool enough to book an interview with Gómez that took place — where else? — in the shower! Okay, it didn’t, but his trip to NYC did coincide with Axe’ promotion of Axe Black body wash and the premiere of Axe’s Shower Thoughts video series, so here’s how the interview went down:

MM: In your TED talk you mention being picked on as a kid and that people can often become paralyzed by fear. Your comfortability in your own skin as a child led to you being bullied, but also paved the way for your success as an adult. How did you overcome that fear of being yourself despite so many kids being dicks to you?

Carlos Andres Gómez: I think I developed the courage as a coping mechanism in reaction to people picking on me, or belittling me, or telling me I shouldn’t be something. Since then, I’ve spent my entire life as a writer, performer, and a man trying to broaden the definition of masculinity to be inclusive of all the different and infinite permutation of what guys look like. My book, Man Up: Reimagining Modern Manhood ($13 @ Amazon.com) … is all about the ways that I found permission to give to myself to be my … fullest and best self. I believe that each of us doing that gives other men permission and I want to give all the different guys out there permission to embrace who they are.

But how did you get to that point?
I think it’s about learning to boldly and unapologetically show the world who you are. I found that no matter where you are on the planet — and some people may be startled by it, and some may be like, “Whoa! I don’t know what to do with that” — but people overwhelmingly respect [if you embrace who you are]. The second thing: If you’re able to embrace who you are, you also give other people permission to do so. You unlock yourself and you unlock other people. It’s one of the reasons I felt really excited to partner with Axe on this campaign because I don’t do a lot of stuff with  brands. I don’t just want to do a campaign or do a partnership just to do it.  I feel like everything I do is an extension of what I’ve done as a speaker, author, and performer. 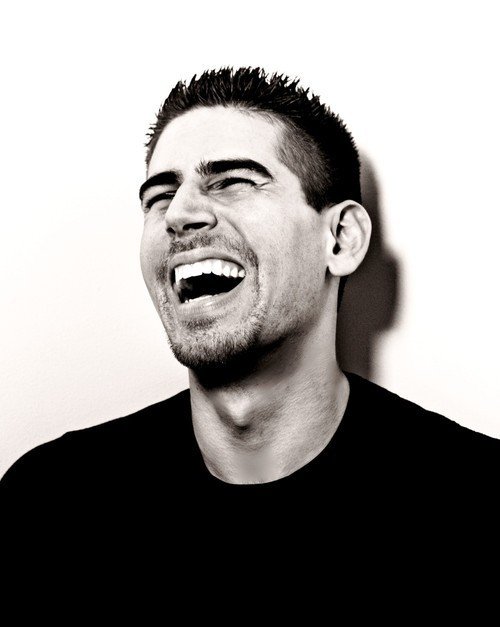 Tell us more about Axe’s Shower Thoughts ?
It’s about the shower being a place where guys can think creatively, where they can connect with their authentic selves. There’s one video that involves former NBA player Muggsy Bogues (see above), another with YouTube star Chester See … and one with Brendan Robinson, an actor on Pretty Little Liars.  Anyone of us can be passionate about sports, music, and personal style. So teaming with Axe on this just felt like a good fit …

What’s the key to staying cool under pressure?
If your in front of an audience and trying to do what you think they want you to do, or if you’re trying to pander to them … oftentimes audiences will pull back. They can tell if you’re faking it. If you get up in front of an audience and you’re like, ” I had the most absurd morning, I spilled coffee on my pants as you can see”. The whole room is unlocked imminently … and they’re like “This is a real dude that I can relate to.”

How do you deal with negative assholes who trash talk your message of positivity?
To be courageous you’ve got to be willing to be vulnerable and different. And I think that a lot of the time you’ll see a positive impact of that more quickly than you might realize. It’s  scary at first, but it will open up entire worlds for you that you didn’t have there before.

Do you have a tip for handling internet vitriol?
If there’s negative energy or people bring really negative stuff my way, I don’t energize them. I leave it where it is, and I don’t personalize it.

Show Your Boss You Need To Be Promoted: Here’s How

How to Plan for the Costs of Going to College