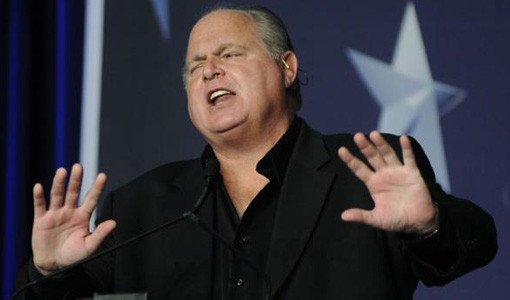 Recently, Rush Limbaugh said that he thought the name of the villain in The Dark Knight Rises was meant as a dig at Republican Presidential nominee Mitt Romney:

“The villain in The Dark Knight Rises is named Bane, B-a-n-e. What is the name of the venture capital firm that Romney ran and around which there’s now this make-believe controversy? Bain. The movie has been in the works for a long time. The release date’s been known. … Do you think that it is accidental that the name of the really vicious fire-breathing four-eyed-whatever-it-is villain in this movie is named Bane?”

Of course, Bane predated Romney’s candidacy by nearly two decades. So Limbaugh cleared up what he meant: “Batman is more like Romney … and that Bane guy seems more like an Occupy Wall Street guy.”

Anyway, if you like that, you’ll love this collection of Limbaugh gems.

ON THE NFL:
“Look, let me put it to you this way: The NFL all too often looks like a game between the Bloods and Crips without any weapons. There, I said it.” (2007)

ON MICHAEL J. FOX BEING A GREAT BIG FAKER:

ON HIS LOVE OF THE LADIES:

ON THE BP OIL SPILL:
“The ocean will take care of itself on its own if it was left alone and left out there. [Oil] is natural. It’s as natural as the ocean water.” (2010)

ON CIVIL RIGHTS LEADERS:
“Have you ever noticed how all composite pictures of wanted criminals resemble Jesse Jackson?” (1993)

ON SEXUAL MORES:
ON HEALTH CARE:
“Exercise freaks … are the ones putting stress on the healthcare systems.” (2009)

ON THE ORIGINS OF FEMINISM:
“Feminism was established so as to allow unattractive women access to the mainstream of society.” (2005)

ON THEN 13-YEAR-OLD CHELSEA CLINTON:
“Socks is the White House cat. But did you know there is also a White House dog?” (1993)

ON HOW WOMEN ARE LIKE CATS:
“She comes to me when she wants to be fed. And after I feed her, guess what? She’s off to wherever she wants to be in the house, until the next time she gets hungry. She’s smart enough to know she can’t feed herself. She’s actually a very smart cat. She gets loved. She gets adoration. She gets petted. She gets fed. And she doesn’t have to do anything for it, which is why I say this cat’s taught me more about women than anything in my whole life.” (2006)

ON THE DANGERS OF PEACE PIPES:
“Let’s check the scoreboard. How many Native Americans were killed by the arrival of the white man through disease and war? And how many people have died since the white man arrived due to lung cancer, thanks to the Indian custom of smoking tobacco? Who are the real killers here? … Where are our reparations?” (2010)

ON KILLING GAY BABIES:
“Let’s say we discover the gene that says the kid’s gonna be gay. How many parents, if they knew before the kid was gonna be born, [that he] was gonna be gay, would take the pregnancy to term? Well, you don’t know but let’s say half of them said: “Oh, no, I don’t wanna do that to a kid.” [Then the] gay community finds out about this. The gay community would do the fastest 180 and become pro-life faster than anyone you’ve ever seen.” (2003)

ON HOW TO TO MAKE THE WORD “RIBS” EXTREMELY OFFENSIVE:ON HOW ABU GHRAIB WAS JUST LIKE YALE UNIVERSITY:
“This is no different than what happens at the Skull and Bones initiation … I’m talking about people having a good time, these people, you ever heard of emotional release? You ever heard of the need to blow off some steam?” (2007) 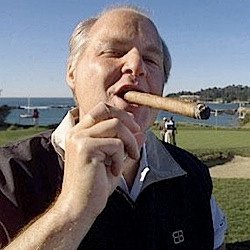