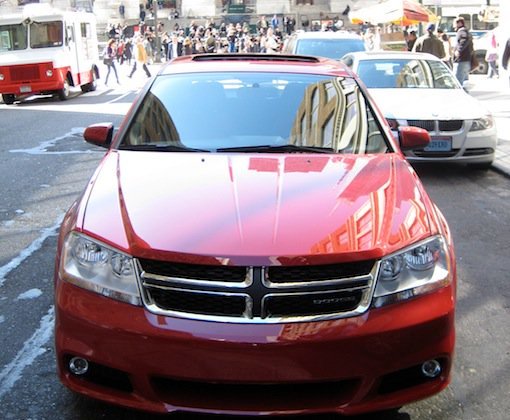 For most guys, the name Avenger conjures up images of Iron Man, Captain America, and Scarlett Johansson in a skintight black bodysuit. So in order for a car to live up to that name, it had better be technically impressive, American-made, and good-looking.

The Dodge Avenger hails from Detroit, so it’s got the whole American thing down. But this incarnation of the Avenger, first released in 2008 — Dodge also produced an Avenger from 1995 to 2000 — has had some trouble in the tech and looks departments during its brief lifespan. So for 2011, Dodge decided to revamp the car. And the results show.

First, the hardware. The base engine remains the same — a 2.4-liter, 173 hp four-cylinder. It’ll get you where you need to go, but not nearly as quickly as the all-new 3.6-liter, 283 hp V6. And at 29 mpg on the highway, it’s only marginally less economical than the four-banger. The six-speed automatic transmission occasionally had trouble putting power to the pavement, but as I found out during an arguably ill-advisedly speedy turn onto a rural highway after exiting the interstate, the Avenger’s updated suspension can definitely handle some fun in the corners.

Outside, the car looks virtually the same aside from some minor sheet metal tweaks and a new grill. Which is just fine — the Avenger mimics the muscular styling of the Charger. The car’s old image problem was really with the interior, but the Avenger’s new cockpit boasts eye-pleasing styling and higher-end materials. There’s still plenty of room, especially up front in the standard bucket seats — great-looking leather and fabric options are available, though there is one fabric choice that results in unsettlingly shiny seats — and controls are easy to figure out and exactly where they should be.

The $23,840 Avenger — that’s the base price with the V6 — has some steep competition from classmates like the Honda Accord, the Ford Fusion, and the Subaru Legacy. But the 2011 revamp will provide competition to them as well.

Modern Vehicle Safety Features That Could Save Your Life

Injuries and Accidents: How Cost of Damages Are Computed