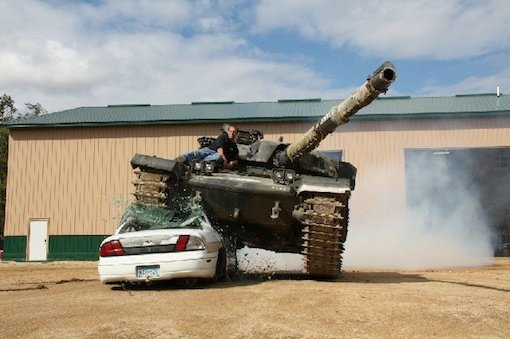 Generally speaking, I’m not that into guns. In fact, if someone were to ask me, “How often would you like guns to be shot at people and animals and stuff?” I would say, “Not that often, to be honest.”

But when I was presented with the opportunity to visit Kasota, Minnesota to drive bona fide military tanks and shoot a “historical military firearm,” I decided to give it a shot (haha!). I envisioned myself as the Jessica Biel character in The A-Team, totally kicking as much ass as all the guys while also making out with Bradley Cooper. (Warning: I did not actually see The A-Team.)

Besides, it’s not often that civilians get the chance to do something that makes them feel like dying of fear, and you know the old saying: “Grab life by the wheel of an armored tank and run over everything you see.” 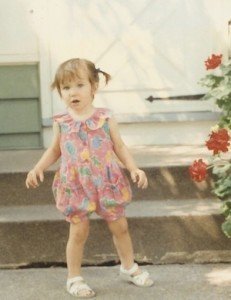 I arrive early to the Drive A Tank headquarters an hour and a half south of Minneapolis. Since I’m a little nervous about this whole thing — to illustrate how tough I typically feel, I’ve included an old pic of myself to the left — I decide to get pumped up. But as I scroll through my iPod, I realize that I don’t have any “pre-tank-driving” music. So I eat the lunch I’ve packed instead. It’s a peanut butter and jelly sandwich. That makes things worse.

When I head inside the main building, there are already several people gathered at a table. Seven men — three in their twenties, four who are middle-aged — have traveled here from as far away New Jersey, Washington D.C., and Massachusetts just to do this. There’s one other woman there who’s the wife of one of the older guys. I give her a look as if to say, “BOYS! Am I right?” but I don’t think she notices. As we chat, one of the younger guys says, “Gun laws are terrible in Massachusetts,” and it takes me a minute to realize that what he means is that there are a lot of gun laws in Massachusetts. “You can’t buy more than two boxes of ammo at one time,” he laments.

Tony, the company’s owner, tells us that Drive A Tank is the only place in the United States where civilians can, in fact, drive a tank. Admission for a 3+ hour tank adventure costs $499 and up. Not cheap, but I guess it’s safe to say that you won’t find a lower price anywhere else. As for today’s adventure, Tony warns us that, “There’s a group of 23 Chinese kids in the woods.” Everyone is all, “Uh, what?” until he clarifies that they’re college exchange students taking a marketing class who are here to film our experience. “You didn’t say this was live target practice!” jokes one guy. He is wearing an “Aren’t I Just A Ray of Freakin’ Sunshine?” t-shirt.

The unanimous response when we walk into the tank garage is, “Sweet!” The tanks are very big and generally badass and scary-looking. “Tanks might seem dangerous, but they’re not that dangerous,” Tony clarifies. After some background information, Tony sets us free to roam around. We all pop in and out of the tanks like prairie dogs, but Army-er. One of the employees leads me to one we’ll actually be driving, and I’m alarmed to see only one driver seat and one set of levers and pedals. I had imagined a copilot-type situation, and I’m not thrilled about being given this level of responsibility. “You’re not gonna be down in there with us?” I ask.

“Well, what if something goes wrong?”

“There are shut-off switches,” he says.

Then it’s time to head out. We pile into the back of a tank, the top of which is open (for mortars, or something?), and ride out onto the track. The beleaguered needing-more-boxes-of-ammo guy is the first to volunteer to drive, obviously. Tony asks if any of us wants to ride in the back, and for some reason I say that I do.

If I were to describe the drive as “bumpy” and myself as “jostled,” that wouldn’t do it justice. Ammo guy takes off like he’s on a mission that we aren’t in on, in which the main objective is to “disregard the lives of others.” He has allegedly never driven a tank before, but what he lacks in experience he more than makes up for in unfounded confidence. We ride through deep mud, over sizeable hills, and through a very dirty pond. No obstacle is too great, which I guess is one of the perks of having a tank.

Eventually, it’s my turn to drive. There are two tank options: a green Abbott with an 18-foot (inactive) gun, and a beige FV432 APC. I climb into the Abbott, which has an open-air driver’s hatch, and receive a full 30 seconds of training that essentially boils down to, “Use these levers, please don’t hit any trees.” I drive very slowly. And it really isn’t that hard. It’s like driving a car that can flatten cars.

Then it’s time for the FV432 APC, which is much scarier due to the closed hatch; it has a tiny five-inch periscope for navigating. The driver’s seat space is incredibly tight — I can’t sit upright and instead have to lean back at a 45-degree angle. I’m 6 feet tall, but you would need to be a child to sit comfortably, which seems borderline unsafe for battle situations. It’s also very hot, as the only opening is two feet behind me where the instructor stands.

“You’re not closing that hatch, right?” I ask my instructor.

“Um ok, but just let me breathe some of your air real quick,” I say, panicking. I have many more questions I want to ask. “What happens if I flip the tank? What happens if I hit a patch of quicksand that you didn’t know about? What happens if the engine starts on fire and I can’t climb out quickly enough and you abandon me to save yourself?”

But I keep my mouth shut, start driving, and stop worrying. My instructor even asks me to slow down. Something happens in that second tank: I like it. Too much, actually. As I get close to the end of the track, I see one of the students lying in the grass to the side, taking pictures. “I could crush him so easily,” I think. “He would try to run, but he wouldn’t be quick enough. I’d catch him. He wouldn’t even know what hit him. But what hit him would be a tank.”

Drive A Tank offers a “Car Crush” for another $499 (or $699 to crush two cars at once), and it’s pretty much what it sounds like. I watch two of the guys climb into a tank and drive slowly up, on top of, and over two cars, scattering glass and upholstery everywhere. I’m like, “Cool, destruction!” but then I head inside for air-conditioning and a chair. One of the older guests, who had been to Drive A Tank many times before, nods at me. “Once you’ve seen one car crushed, you’ve kind of seen them all.” So true.