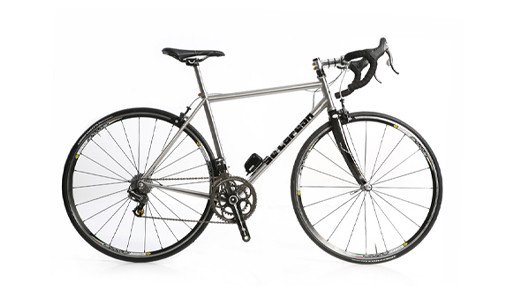 Before we describe the all-new DeLorean bicycle, we’d like to point out how bizarre it is that there even is an all-new DeLorean bicycle. You probably know that Doc Brown turned a DeLorean car into a time machine in the movie Back to the Future. But there’s a reason why Marty says, “Wait a minute, Doc. Are you telling me you built a time machine out of a DeLorean?” He says that because … well, because that was bizarre too.

DeLorean Motor Company was founded in 1975 by a longtime Detroit auto executive named John DeLorean, who was arguably the father of the American muscle car. The DeLorean Motor Company produced only one car — the DMC-12 — which was made of stainless steel, boasted gullwing doors, and looked much better than it performed. Then in 1982, with his company understandably failing, DeLorean was arrested and charged with cocaine smuggling in a bizarre government sting operation. He was found not guilty after arguing, quite rightly, that the FBI entrapped him. He later patented some monorail technology and sold $3,000 watches that he never actually produced. He died in 2005.

So anyway, back to the DeLorean bike. There are actually three of them — the Anyday, the Speed, and the Cruise will be the first models created by DeLorean Bicycles, and they’ll start at a modest $5,495. Currently, only the Anyday is available, and we couldn’t help but ask Sylvester J. Lambert, a principal partner at DeLorean Bicycles, why they didn’t call it the Anytime. “We could have called the Anyday the Anytime,” he tells us, “but with a DeLorean product you want to stay away from time-travel jokes.” Actually, we believe the opposite to be true, so we told Lambert to make like a tree and please provide us with additional information.

The bikes feature Columbus XCR stainless-steel tube frames — stainless steel, just like the DMC-12 — and the Anyday and Cruise models will come equipped with belt drives and hydraulic disc brakes. “You can go ten thousand miles on a belt drive, where a chain gives out after about three thousand,” Lambert says. “The belt is also silent, and doesn’t pick up mud, crud, or blood.” Other features on the Anyday include an 11-speed internal shifter, a full carbon fork, , and wheels coated with a luminescent material that appears to “turn on” when lights hit it. “It’s like what runners have on the backs of their shoes,” he explained. “It glows.” Just like plutonium!