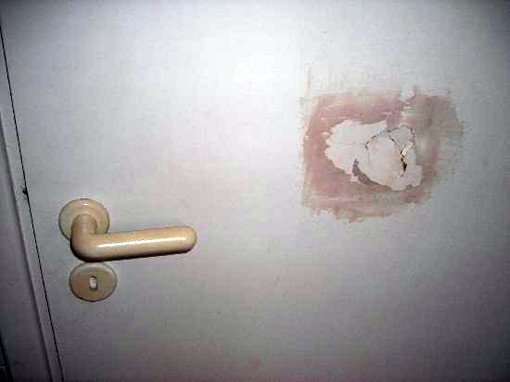 2. NEVER, EVER PUNCH …
… Near Corners, Doors, and Windows: In the United States, building codes dictate that studs be placed vertically, no more than 16 in. on center. What the hell does that mean? That there are up to 43.5 inches of punchable area for every four feet of wall space. That means that you should have about a 1 in 10 chance of hitting a stud (9.375 percent to be exact).

But the rule is no more than 16 in. and there’s a reason for that. At the corners of walls, and around doors and windows, studs are doubled and sometimes tripled for added strength and support. (That’s why people are told to stand in doorways during earthquakes.) But since doors, windows, and corners aren’t necessarily laid out at 16-inch intervals, there are likely to be extra studs where you wouldn’t otherwise expect them.

Also: How To Style Beard Stubble

… “Wet” Walls: Never punch a wall in a room with a sink or a washer and dryer — and never punch one of those walls from the other side, either. The walls may very well have pipes in them and often have extra framing to support the plumbing. A cast-iron waste pipe will mess your hand up in a hurry.

… Common Walls: If you live in an apartment and have neighbors next door, you don’t want them calling the cops about the violent psychopath next door. You want to relieve stress, not compound it.

… Concrete Walls: If you can see the concrete or cinderblock, we’d like to think you’ve already figured out that it’s not a wall you should punch. But some walls have drywall laid over concrete or brick. How do you know? Look to see if the electrical outlets are mounted on the surface of the wall instead of inside it; if they are, it’s a safe bet the wall isn’t hollow.

NEXT: KNOW WHERE TO PUNCH

A Beginner’s Guide to Being a Single Dad