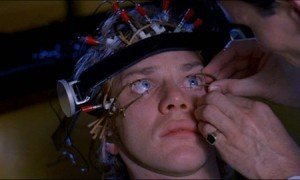 Experimental procedure sounds scary, but you won’t turn into Frankenstein if you take this route. A reporter for MSN documented her journey as a test subject, and the process was simple. The hospital wanted 30 milliliters of her blood; they told her why they wanted it, and gave her a bunch of paperwork to fill out. Fifteen minutes later she was out the door with $35 bucks in her purse. Easy.

How You Cash In: Info should be available at your local hospital, college/university, and on Craigslist (that’s where the reporter saw it). It’s not steady work, so the amount you take home will vary. Of course, if you’re not careful you can get roped into being a guinea pig who’s forced to pop “super awesome pills” like they’re popcorn. Request specifics as to what’s expected of you. If they aren’t willing to supply that, head for the hills. 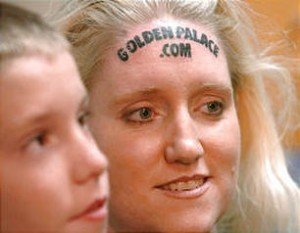 Option # 5: Sell Ad Space On Your  Skin — $2,500-18,000
People were baffled when Mike Tyson got his face inked with tribal scribble … until they saw the junked-up condition of Tyson’s old mansion and remembered he’s a maniac.

And he’s not the only one. Online gaming outfit GoldenPalace.com became famous for its “Human Billboard’ campaign back in the mid-2000s. Emotionally damaged mental patients People from around the country jumped at the chance to earn decent chunks of cash to have the company’s name or logo permanently branded on their body. The woman in the photo got $10,000 for that masterpiece. Another lady received $18,000 to tattoo the Golden Place URL across her chest. Some even settled for as low as a few hundred or an even thousand.

How You Cash In: Simply walk into area businesses and offer up your services. Then run before the cops they call can arrive. 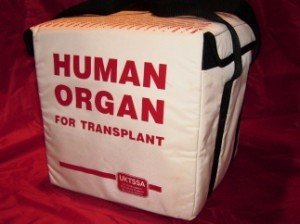 Option# 6: Sell Your Kidney, Liver, Cornea, or Lung — $ Lots and lots … if you don’t get jailed first
It’s illegal to sell body parts on the open market in the United States, but that doesn’t mean some insanely desperate and disgusting people haven’t tried. In 1999, a dude put up his “fully functional kidney” on eBay; before the auction was yanked by site admins, the bidding price reached $5,750,100.

How You Cash In: It’s a little trickier than scalping a concert ticket, but a good start would be to book flights to Israel, South Africa, or Turkey. In 2010, police nabbed people in all three places for organ-trafficking. If you get there and you actually do find a buyer, we suggest requesting they throw in for your airfare, which will cost a few grand roundtrip.