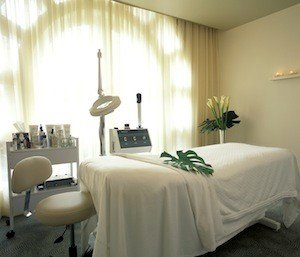 I would never say that I pamper myself — in fact, I do my best to avoid using the word “pamper” in any context whatsoever. But technically, I probably do it on occasion. Springing for box seats instead of sitting in the bleachers. Purchasing gadgets I don’t have a need for. Cooking meth in my basement with name-brand household cleaners instead of generics.

I had never, however, pampered myself by going to a spa. Now, I didn’t think there was anything wrong with guys doing those things, but it wasn’t something that appealed to me. However, as more and more men have started taking better care of their skin — today guys are spending literally hundreds of millions more on grooming products than they were just a few years ago — spas are responding by tailoring treatments to their needs. One example? The unfortunately named Back to Front Facial at the Beverly Hills Hotel Spa by La Prairie. It treats both the face and the upper back and shoulders, where guys often tend to break out.

So, in the interest of scientific inquiry, I went to the spa and got a facial (get the snickers over with now) to see just how guy-friendly it could be. As I lay on my stomach underneath a sheet and blanket — it was way too hot, so that part was definitely geared toward the ladies — I noticed that the softly lit room had no flatscreen or buffalo-wing dispenser. However, it did smell like a nap in a new girlfriend’s bed, which wasn’t so bad. An initial massage of my neck, shoulders, and upper back was done with a warm towel, which was sort of like the towel my barber puts on my face after I get a haircut, only less menthol-y. As a mister misted a “soothing steam mist” on me, my neck, shoulders, and upper back were exfoliated and deep-cleaned with what seemed like a dozen different lotions and salves and creams and whatnot. So far, so good.

Then came the blackheads. The sum total of my experience with them was when a female friend asked me if a guy would be grossed out by all of hers. (I couldn’t even see them when she pointed them out, so I told her to relax … and then added that she’d nevertheless be alone forever because she was so neurotic.) Well, turns out I had a few as well. And part of the lovely esthetician’s job was to … eliminate them with both her nails and an extremely pinchy metal squeezing device. It hurt, but pain is sort of manly, right? Being the gentleman that I am, I apologized to her for having to do such a thing. She didn’t seem to mind.

I then turned over. The misting mister’s mist started shooting up my nose, making me feel like I was being waterboarded by a torturer whose heart wasn’t really in it. (A slight adjustment remedied this.) Lots more exfoliating and cleansing took place, along with a face mask (the spa kind, not the superhero kind). I was concerned all of the La Prairie products would make me smell like a runoff tank at a perfume factory, but instead they just made me smell like I’d recently showered. The esthetician massaged my hands and forearms, which felt great … but it was just to lull me into a false sense of security before she attacked me with the blackhead device once again.

After all was said and done, I wasn’t sure how I felt about the experience. I definitely felt relaxed, but I wasn’t sure if that was really enough. I decided to think about it some more as I pampered myself in a way I was intimately familiar with, so I sauntered over to the hotel’s famous Polo Lounge for a cocktail. Not long after I sat down, a woman sitting next to me actually commented on my skin. I couldn’t believe it. When she told me I looked “glowy,” I said I’d allowed her to touch my face if she was careful. Shockingly, she actually did it.

That settled it. Since pretty much the only reason I — or most guys — so much as bathe is to make myself more attractive to women, I figured the spa treatment qualified as manly.

What Products Will Help You in Home Depilation