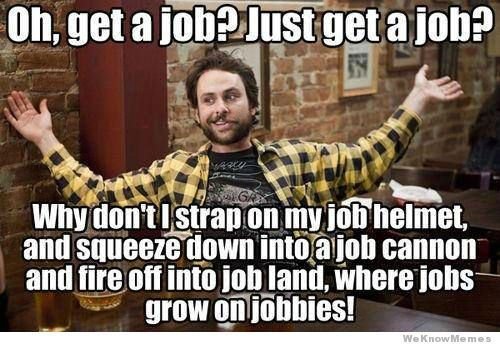 Since most hiring managers — and a handful of  law enforcement officials — frown upon joining a meth sales team, you may have a few things to consider about finding rapid employment. For example, you can’t be too picky about the job you land or the responsibilities (or lack thereof) that you’ll inherit.  And if you’re offered one and you need the loot, take it. Click forth for our tips on how to get a job quickly.

Also: How To Hide Your Hangover at Work

#1. Shave
While women prefer stubble, hiring managers might not. The data isn’t scientifically confirmed, but there are surveys and studies that suggest being clean-shaven is  more likely to give you the nod than if you’re  whiskered.  Just take a look at most male CEOs — they’re not bearded or covered in stubble. We’re not saying you should mimic them, but if you’re looking to get a job quickly trimming your mane and dragging a razor across your stubbly face will certainly help.

#2. Volunteer
Donating time to help a worthy cause can A) build skills, B) help you network, C) cleanse your filthy soul, and D) catch the eye of HR reps. A 2013 study directed by the Corporation for National and Community Service found that unemployed people who volunteered were 27% more likely to get hired than those who didn’t volunteer while unemployed.

Also: How To Ace A Video Job Interview

#3. Speak Up
Research conducted by the University of Chicago Booth School of Business found that being vocal and discussing your interest or qualifications were more likely to get you hired than typing it. Yes, even when you use a winky emoji. Email has no personality or an ability to inflect, but when you speak to someone — humorous and lively fella that you are — you can up your odds of connecting with them on a personal level. If the HR rep likes you on a personal level they’re more likely to push for you to get the job.

#4. Mine Your Friends, Family, and LinkedIn Contacts
And also put out the word on social media. Not that you want to come off as desperate — you still have some dignity left, we think? — but a 2010 survey by Right Management found that forty-one percent of the clients they analyzed admitted that they scored a job via networking.  Twenty-five percent reported finding a gig through an Internet job board. The remaining percentages were divided between an agency/search firm, other, direct approach, online network, and advertisement. Trouble is, according to Forbes, roughly 80 percent of jobs never get posted. In other words, start digging through your contacts.