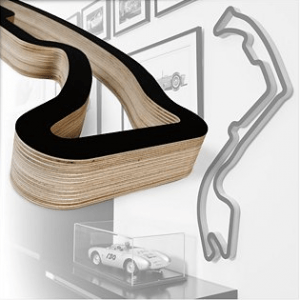 Whether you’re a fan of Formula 1,  NASCAR, or R.C. Pro-Am for 8-bit Nintendo — or even if you hate all of those things and just want something cool to hang on your wall — you’ll want to check out Race Tracks Of The World. They’re replicas of, you guessed it, racetracks and road courses from, uh, all over the world. Made with Baltic birch and black formica, the precision-cut, custom-made tracks generally measure about 36″ square — depending on the track — and can be hung on a wall without nails or hooks.

You can pick from a few dozen tracks like Laguna Seca, Le Mans MotoGP, and Road America; tracks generally cost about $200 or so, though the massive Nurburgring Nordschliefe costs $275. Yes, you could actually do a lap on that circuit for a mere $50 — but that’s not including the cost of your hospital bills or car after you wrap it around a tree in the Adenaur Forst.