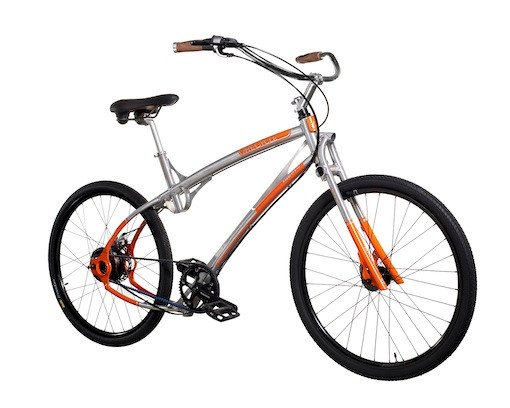 Riding a bicycle is already a pretty Earth-friendly activity. But the all-new reCycle aims to make it even Earth friendlier as the world’s first 100 percent recycled aluminum bike. “I was looking at this recycled grocery bag and I thought, ‘Recycle … re-CYCLE!’ explains Bryce Edmonds, an avid cyclist who came up with the idea. “I wondered why no one was doing this.” Well, now someone is.

Edmonds teamed up with Zen Bicycle Fabrication to produce three prototypes: the Moshi Moshi, a fixie with a flip hub, the offroading Mudmaste, and the mBula (the cruiser pictured above). The bikes, which are still in the development phase and in the midst of a Kickstarter campaign, will start at about $2,000. That’s a lot to pay just to feel warm and fuzzy about Ma Nature, but the bikes are legit. For starters, the Mudmaste and mBula feature belts instead of chains, and belts don’t need the maintenance that chains do. (Think belts aren’t tough enough? They power Harleys.) The bikes also boast eye-catching features like a seat tube-free design, personalized forks, and saddles and grips made from sustainably grown cork. “The prototype bikes don’t look anything like my original vision — they’re actually way cooler,” Edmonds says. Plus, the bikes are made almost entirely in the U.S. of A.