Brian Cox is one of those guys who seems to be in almost every film you see. He was the O.G. Hannibal Lecter in the 1986 film Manhunter, then proceeded to star in films like Braveheart, Rushmore, Super Troopers, Bug, Adaptation., 25th Hour, X2, Troy, The Bourne Supremacy … well, like we said, he’s been in lots of films. His latest role is Harry Montebello, the godfather of a criminal family operating in Australia in the new Hulu.com show The Straits. (It’s sort of like a cross between Scarface, The Sopranos, and Crocodile Dundee.) We asked Cox a few questions about the series and his impressive career.

You filmed the series on the Torres Strait Islands, which are north of the Australian mainland. What was that like?
Physically, it’s dangerous. Australia has got the most poisonous spiders in the world. And where we filmed, they have got salt water and fresh water crocodiles. It’s not easy to go into the water. I also learned quite a bit about the islanders. We filmed in an aboriginal settlement, which was beautiful, and where the last man eaten by a cannibal in Australia was eaten. I went to the rock where the cannibal cut up and ate the guy. It was quite a horrific image. The aboriginals are really magical people, and they’ve been, excuse my French, fucked over.

Do you think Americans will be able to warm up to a series that’s based in such a foreign place?
Americans will like the frontier element and the gangster element — you’ll think of The Sopranos, though with The Sopranos, especially the Italian culture, the “made man” and all that, I think is bullshit. But it deals with the codes by which people live their lives, which are based on the notion of family. The Straits is a family saga. It’s also darkly funny here and there. Harry’s a great character to play because he has this wicked sense of humor. He’s dealing with dilemmas in his marriage. And he keeps getting shot.

You’ve sported an impressive array of facial hair styles throughout the years, and you have a very expressive face. Are those two things related?
I can’t help my face, my face is my face. I think I’ve learned how to use it and how to control it. And interestingly enough, my hair is quite white and has been since I was quite young. When that happened, I discovered that the whole chameleon aspect of being an actor suddenly was given to me on a plate. When your hair is devoid of color, you can make it whatever color you want to make it. Equally, you can have a beard, a mustache — you can do all kinds of things with your physical appearance. 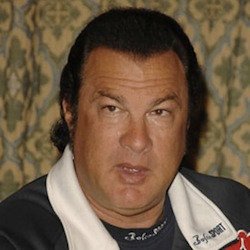 You’ve had some extremely impressive co-stars. Ever worked with anyone who was … less impressive?
I once did a film [The Glimmer Man in 1996] with an actor who should remain nameless … but his name is Steven Seagal. The director came up to me said, “I’m sorry, but Steven will not do offlines with you.” Offlines means when you’re doing a scene and the camera is on you, and the other actor does his lines off camera. He wouldn’t do that. I turned to the director and said, “I’m so relieved, I would only find it a distraction.” Sometimes you act with people that are completely beyond the pale.

Judging by your output, you must work constantly. How do you decide when to accept or turn down a role?
Finances can make a difference — sometimes you say, “If you pay me three times as much, I’ll do it.” There’s a couple of jobs I’ve not enjoyed, but basically you find gold in it wherever you go. Life is about traveling, not about arriving somewhere. For instance, with The Straits, I thought, “Here I am in Australia, around a culture I’ve never lived in. What a wonderful thing.” It also happened to be a great job, though sometimes the jobs aren’t so great.

Do you ever get pissed off that British TV host and physicist Brian Cox has the same name as you?
I don’t know the man, but he seems very nice. He did ask me to be on his monkey show, but I wasn’t able to do it. My agent once got a call and was asked, “Would Brian be interested in taking the Olympic torch through the streets of Manchester because of his wonderful connection with Manchester?” Now, I used to work in Manchester in the 60s and early 80s, but I basically haven’t even been in Manchester for more than 20 years. Turned out they had the wrong Brian Cox.