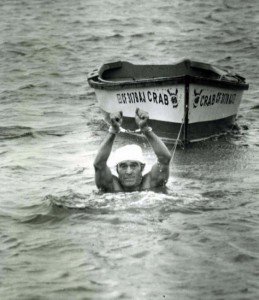 LaLanne was essentially the first big-time fitness guru. You know how old-timey strongmen didn’t actually have very good physiques? Well, LaLanne was ripped even by today’s standards. Take a look at the biceps on his biceps in the photo to the left. Dude was 60 years old when that was taken. (Why is he handcuffed and tied to a boat? We’ll get to that.)

LaLanne did a lot: The Jack LaLanne Show, a daytime exercise program, enjoyed a 34-year run on TV. He wrote several books. And he managed to look okay in a  jumpsuit even though he wasn’t fixing or operating high-powered motorized vehicles.

But what we admire most are the insane feats of strength he pulled off over the years. So, to pay tribute to the guy, we’ve compiled some of the most incredible …

• In 1954, at age 40, he swam the length of the Golden Gate Bridge with 140 pounds of equipment strapped to him. Eat that, Michael Phelps!

• A year later, while in handcuffs, he swam 1.23 miles from Alcatraz to Fisherman’s Wharf in San Francisco — a notoriously dangerous stretch of water plagued by brutal currents and sharks. 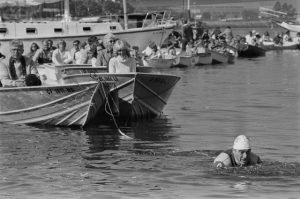 • The next year he towed a 2,500-lb. cabin cruiser as he swam the Golden Gate Channel. What was supposed to be a one-mile swim turned into a six-and-a-half mile journey due to the horrendous currents.

• A true patriot, LaLanne celebrated the nation’s bicentennial in 1976 by swimming one mile in Long Beach Harbor while handcuffed and shackled. He pulled 13 boats — one for each of the original colonies — that contained 76 people. USA! USA!

• The 70-year-old dusted off his handcuffs and shackles — admittedly, that is generally not the start of a sentence you should ever continue reading — and hopped back into the water. This time, he swam 1.5 miles while pulling 70 boats with 70 people on them in Long Beach Harbor.

• And the most amazing of all his stunts: In 2004, at age 90, LaLanne told an interviewer that he still enjoyed an active sex life.