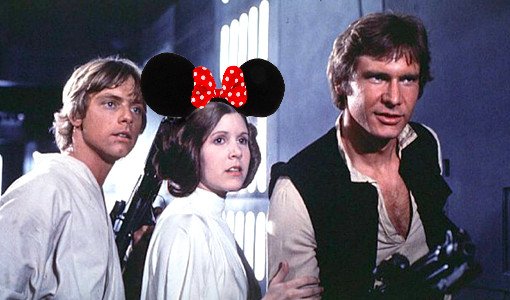 A long time ago in a galaxy far, far away….

Darth Vader and the Emperor have fallen, but parts of the Empire remain. And so the Rebel Alliance has announced its plans to acquire what remains of the Empire and its various holdings in a blockbuster 4-billion-credit deal made possible in part by the fact that Jabba the Hutt is finally out of the way.

Meanwhile, Princess Leia Organa has returned to the forest moon of Endor to live amongst seven Ewoks with remarkably divergent personalities. But Leia has fallen into a mysterious deep sleep from which she cannot be roused, and so Han Solo, Chewbacca, C-3PO, and Luke Skywalker have embarked on a rescue mission ….

HAN, LUKE, CHEWBACCA, and C-3PO crouch next to a gigantic fern. HAN is looking through space binoculars.

HAN
She’s down there all right. I can feel it.

LUKE
(smugly)
Sure you can.

A small wooden building in the middle of a clearing. Smoke is rising out of a chimney. There are lights inside. The four compatriots sneak toward the door.

HAN
I’ve got a bad feeling about this.

A RANCOR suddenly emerges from the trees on the other side of the clearing. All looks lost as HAN, LUKE, C-3PO, and CHEWBACCA are caught by surprise. But just as the RANCOR is about to descend upon them, it slips on muddy ground and begins sliding and flailing to comic effect. Eventually, it falls onto its belly and spins around in the mud. LUKE immediately uses his Jedi abilities to leap onto the RANCOR’s back, then plunges his lightsaber into it, killing it. He triumphantly looks at Han.

LUKE rejoins HAN, CHEWBACCA, and C-3PO. HAN, pistol raised, kicks in the door and rushes in, followed by the other three.

The four stop cold. Facing them are seven Ewoks. There is a moment of silence. Then one Ewok sneezes loudly, setting off a chain reaction of activity as the camera pans: One Ewok brandishes a spear angrily. One runs out of the room. One slowly closes his eyes and falls over. One adjusts crudely made eyeglasses. One dances around in a circle. One hits himself in the head repeatedly with the severed arm of a scout trooper.

The EWOK WITH GLASSES responds with gibberish and motions across the room. There, LEIA is lying on a bed that’s much too small for her.

HAN rushes over to LEIA and kneels beside her. LUKE and C-3PO follow. CHEWBACCA is surrounded by Ewoks, who are fascinated by him. They offer him something to eat, which he gladly accepts.

HAN
Leia! What do we do?

C-3PO
Sir, I believe the only thing that can awaken her is…a kiss.

HAN and LUKE both look at LEIA, concern obvious on their faces. LUKE then moves forward and begins to bend down to kiss her. But before he can, HAN stops him and looks at LUKE as though he is insane. HAN then kisses LEIA as a petulant LUKE looks on. A moment passes, and LEIA’s eyes flutter open. She smiles at her friends.

LEIA
I can’t believe we’re all here again, doing this!

At that moment, CHEWBACCA and an EWOK, eating out of the same crude wooden bowl of space noodles, begin eating the same long noodle from opposite ends until their mouths touch, surprising them both.