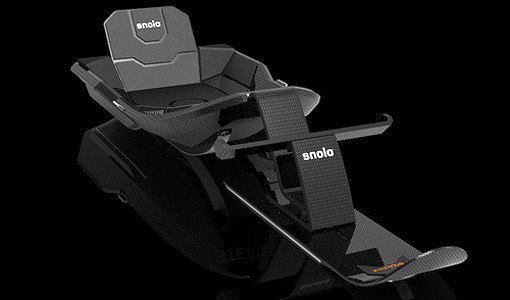 Going over the river and through the woods to Grandmother’s house wouldn’t be such a miserable chore if you could do it traveling at highway speeds in the Snolo Sled Stealth-X. It’s far more sleek than your rickety old toboggan, and it performs far better than the $7 Clark Griswold saucer you bought at the gas station. Which is why the Stealth-X costs $3,000.

Yes, that’s a little pricey for a sled. But the Stealth-X’s body is made mostly of carbon fiber, and thanks in part to a massive front ski — it’s really more like a snowboard — that’s more than two feet long and seven inches wide, the sled can easily take on both hard-packed snow and soft powder. To turn the sled and avoid the crowd of selfish grade schoolers clogging up your favorite sledding hill, simply lean in the direction you want to go. And thanks to a padded bucket seat, you’ll be plenty comfy while you’re flying down the hill past punks on snow tubes. And we do mean “flying” — during test runs, the Stealth-X reached top speeds over 40 mph.

Best of all, once you’re done sledding, the whole thing folds up into a package you can wear like a backpack. Assuming, that is, you don’t break your back using it.