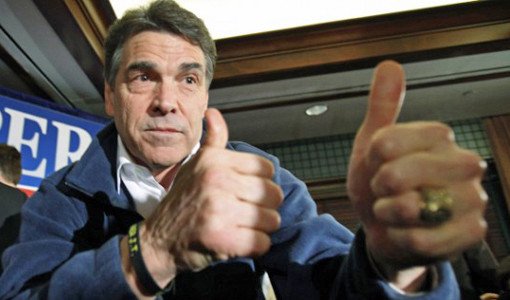 Rick Perry, the former Governor of Texas who spent more than $15 million garnering 14,323 votes in the 2012 Iowa and New Hampshire primaries before quitting the race, has again reminded us what an idiot he is by comparing homosexuality with alcoholism. The quote:

“Whether or not you feel compelled to follow a particular lifestyle or not, you have the ability to decide not to do that,” he said. “I may have the genetic coding that I’m inclined to be an alcoholic, but I have the desire not to do that, and I look at the homosexual issue that way.”

We weren’t too surprised, actually. Why not? Because Rick Perry has a history of saying idiotic things, including …

ON THE BLOATED GOVERNMENT

ON THE BP OIL SPILL

“From time to time there are going to be things that occur that are acts of God that cannot be prevented.” (2010)

ON THE HEALTH BENEFITS OF FREEDOM (OR WAS IT FREEDOM FRIES?)
“There’s nothing wrong with America that an extra dose of freedom won’t cure.”

ON THE MINIMUM VOTING AGE IN SAUDI ARABIA AND THE DATE OF ELECTIONS IN … WELL, WE’RE NOT SURE
“Those of you that will be 21 by November the 12th, I ask for your support and your vote. Those of you who won’t be, just work hard.” (2011)