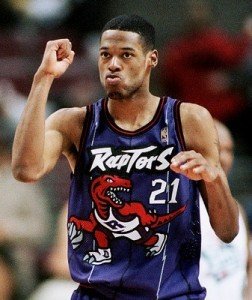 TORONTO RAPTORS | 1995-2001
A dude wearing purple is tough enough — though Randy Moss did it twice — but slap on zigzag stripes and a child’s conception of the Triassic Period, and you’re pretty much guaranteed failure. The Raptors ditched the purple unis in the mid-2000s, though they still guarantee their fan(s) failure every year! (Related? Things we won’t miss if the NBA cancels the season.)