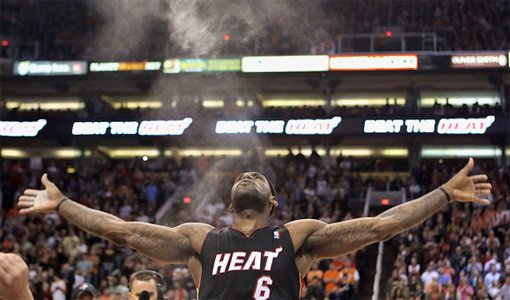 With the first two weeks of the NBA season cancelled and no end in sight to the ongoing lockout, it’s almost time to accept that we won’t be seeing LeBron James’ amazing chalk-cloud ritual at all this year. While there are things we’d miss if the entire basketball season were lost — gratuitous shots of cheerleaders doing sky-high leg kicks, Charles Barkley’s commentary — there’s also a bunch of stuff we wouldn’t miss so much. For example …

#1: THE NEVER-ENDING REGULAR SEASON
Yeah, 82 games. Nearly half a year’s worth of matchups, and most of them aren’t good enough to fill airtime on ESPN 3. With the exception of a few marquee games during Christmas, it’s no wonder so many people lose interest until the playoffs … when even more people lose interest since the playoffs are so damn long. Which leads us to …

#2: THE NEVER-ENDING PLAYOFFS
Each series is a best of seven in order to advance to the next round. With four rounds needed to win it all and three or four-day gaps between each game, you’re potentially looking at two freakin’ months of postseason.

#3: UNNECESSARY SUSPENSIONS
It’s one thing to suspend Ron Artest for leaping into the stands to pound on some dude’s face, but is it really necessary to suspend a guy like Andre Miller for knocking Blake Griffin to the floor when no foul was called during the game? That’s what NBA executives did last year after checking out the video and determining Miller’s foul was too rough. Nothing like dropping more than $100 on a ticket, parking, and overpriced arena food only to find your favorite player is riding pine because some guys in suits want to water down the game’s physicality.

#4 PREGAME INTROS
How many times can we hear those played-out Jock Jams tracks before it’s time to riot? Throw in a fog machine, spotlights, and a PA announcer who moonlights as a strip-club DJ, and you’ve got every intro act in the entire league.