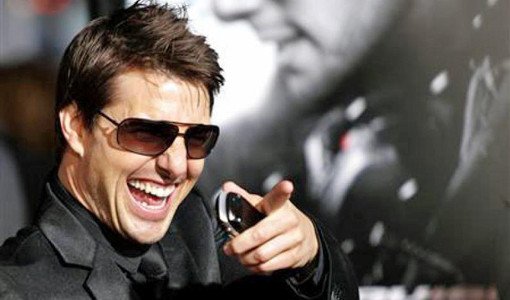 People love to hate Tom Cruise. Sure, he’s a nutty Scientologist. And because of that, he says some pretty insane things. And some people believe he hypnotized Katie Holmes with thetans, then married her and tricked her into rearing a child begat with the seed of L. Ron Hubbard.

But hey, Cruise just learned that  he’s getting divorced, and Katie is taking Suri with her. Plus, it’s Cruise’s 50th birthday today. (Apparently thetans also slow the aging process by about 15 years.) So we’re going to take it easy on the guy. And to be honest, Cruise has done some pretty cool stuff over the course of his career. So just for today, we’re focusing on all the things we like about Tom Cruise …

1. He was smart enough to drop his ridiculous actual last name, Mapother, in favor of his badass middle name, Cruise.

4. He played a character named Woody in a movie about dudes losing their virginity in Tijuana (1983’s Losin’ It). Heh heh.

6. He was Ryan Gosling before Ryan Gosling was Ryan Gosling — and we’re not just talking about how very, very handsome they both are. This is what Cruise did in 1996: 1) After witnessing a hit-and-run accident in L.A., he called for help, stayed with the victim, and picked up her $7,000 emergency room tab. 2) At the London premiere of Mission: Impossible, he pulled two kids out of the crowd of 10,000 after noticing that they were being crushed against the police barricade. 3) While vacationing on a yacht off the coast of Italy, he brought five strangers aboard his vessel when their boat caught fire and sank.

8. Some people mock him for it, and it’s not like he’s saving lives, but we still think it’s pretty cool that he’s done a lot of his own stunts on the Mission Impossible movies.

9. He’s no snob when it comes to choosing roles. Which is why, in 1988, be became the only actor to appear in the movie that won the Academy Award for Best Picture (Rain Man) and the Razzie Award for Worst Picture (Cocktail).

10. He gave an entire generation of high-school nerds the (false) hope that they could bang Rebecca De Mornay on an el train one day. He also dated De Mornay for a couple of years.

11. Though he was a young, successful actor in the 1980s, he never became a core member of the still-annoying-to-this-day Brat Pack.

12. He flies a stunt plane. However, if he insists on being called Maverick while doing it, we take this one back.

13. “Holy sh*t, Tom Cruise is doing that?!” Character No. 3: Aging rock star Stacee Jaxx in Rock of Ages. Okay, this one wasn’t a great idea, but Cruise learned how to sing and play the guitar for the part. You have to admit, the guy doesn’t do anything half-assed (with the possible exception of fulfilling his, uh, marital obligations).

How To Run A Successful Car Wash Business

How Much Money Do I Need to Start a Business in College?