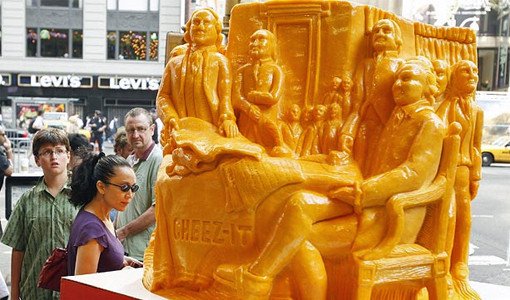 There’s nothing wrong with the orange goo you squirt on crackers or the powder you sprinkle onto microwaved macaroni and cheese — but that stuff isn’t cheese. There’s as much to know about cheese as there is to know about wine, and dropping a little cheese knowledge can impress a woman just as much as doing the same with wine (plus, it’s much easier to talk about cheese without sounding like a douche).

For some pointers on what men should know about cheese, we went to Elizabeth Chubbuck, associate director of wholesale  at Murray’s Cheese Shop in New York City.

1. DON’T BUY PROCESSED CHEESE
Prepackaged by-the-slice cheese is usually packed with preservatives, salt, and food coloring.  So skip the Kraft Singles and use cheddar instead. Chubbuck recommends Prairie Breeze or Tickler. (Dumb names or not, they’re both delicious.) In addition to their addictive flavor, they’re both full of calcium lactate crystals that will add a slight crunch when you take a bite.

2. NOT ALL CHEESE GOES BAD
Hard cheese like Parmesan or Jarlsberg won’t go bad if it’s stored properly. If you wrap it in a piece of parchment paper and seal it in an airtight Tupperware container, all you’ll have to do is cut off any blue surface mold when you’re ready to eat it. Soft cheeses are a different story; they’ll spoil quickly because they pack a lot of moisture. So only buy what you plan to eat within a few days.

3. CHEESES ARE SEASONAL
Which type of cheese is “in season” has to do with when the animal making the milk starts lactating, as well as how long the cheese has to age. Stick with sheep’s milk varieties during fall, and switch to heartier types like Gruyere and Comte in the winter. Soft goat’s milk cheeses are at their prime in late spring and early summer.