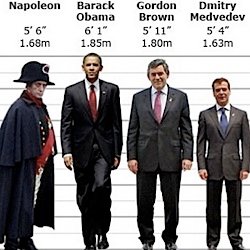 You may want to sit down, because scientists have made a shocking discovery: CEOs and politicians lie.

More specifically, they lie about their height. At least, some of them do. A study done by researchers from Cornell and Washington University showed that people in power tend to lie about being — or actually believe that they are — taller than they really are. In one experiment, 266 subjects were given an aptitude test and told they’d be assigned a role — manager or employee — based on their answers. Then, because it was a test being run by sneaky scientists, the participants were all given fake feedback and randomly assigned roles as either manager or employee. After the experiment, they were each handed a questionnaire asking for personal information like height and eye color. Subjects who’d been named managers during the experiment, still drunk with power, tended to report being taller than they actually were, while regular employees recorded their true height because their souls had been crushed by their phony management overlords.

It all kind of makes sense. It’s been shown previously that tall people tend to get promoted more often and earn more money. And 58 percent of presidential elections have been won by the tallest candidate. (Barack Obama is 6’1″, Mitt Romney is 6’2″, and poor li’l Newt Gingrich is only 6’0″.) As one of the study’s authors put it in The Telegraph, “Given that height is associated with power, raising your height may make you feel powerful, which helps explain the continuing popularity of high heels and offices on the top floor.” Though you can’t really blame male CEOs and politicians for lying about their desire to wear high heels.

Bitcoin is now one of the most used cryptocurrencies all over the world. More and more people...

Top 10 Factors Which You Need To Know About Before Selecting...

Pay Attention To The Top 10 Benefits Of Trading In Bitcoin!