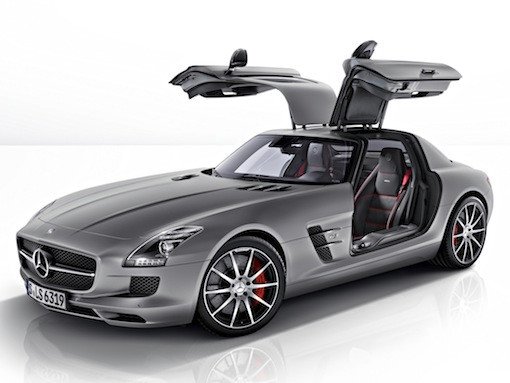 We’re on the Streets of Willow racetrack, a nasty ribbon of asphalt on the outskirts of Rosamond, CA behind the wheel of the new 2013 Mercedes-Benz SLS AMG GT Coupe. Willow is a narrow road track with slight elevation changes and hardly an inch of run off, so if we make one wrong move, it’s into the scrub brush with a $200,000 car that isn’t ours. We are trying to avoid that.

Mercedes-Benz has upped their game from the outgoing 2012 SLS AMG — the car is a modern reinterpretation of the famed 300SL Gullwing coupe of the 1950s — by adding 20 extra ponies for a more powerful 6.3-liter, 583 hp dry-sump V8 engine. (Each engine is signed by the AMG technician solely responsible for assembling it.) They’ve recalibrated the DCT seven-speed transmission for quicker shifts, and modified the adaptive suspension to aid in aggressive driving at the track … and, let’s be honest, on the street. The SLS AMG GT accelerates from 0-60 in a sprightly 3.7 seconds, with an electronically limited top speed of 197 mph. It’s as fast as it looks.

And it looks fast. For 2013, the GT has been refreshed with darkened head and taillights, some sweet red brake calipers, and unique 10-spoke wheels with matte-black inlay. There’s a high-gloss black finish on the front grille, outside mirrors, and the hood and fenders. Mercedes has also reworked the interior with Santa-Claus red seatbelts, red contrast stitching, and some of the most supple Alcantara upholstery to come from the wild Alcantara herds of Italy.

So that’s what we’re dealing with on the Streets of Willow. We’re careful at first, waiting for the tires to warm up, but soon we throw the DCT tranny into Sport+ mode and start flying through the corners and shooting down straightaways at more than twice freeway speeds. The mellifluous sounds of engine and tires working in tandem fills the cabin, and despite the speeds, we feel at ease. Two seats, big engine, great transmission, and some gullwing doors all hand-built with love in a small town in the middle of Germany.

Modern Vehicle Safety Features That Could Save Your Life

Injuries and Accidents: How Cost of Damages Are Computed