The Die Hard franchise has fallen on hard times, quality-wise. But the original, first released exactly 25 years ago, remains the greatest action film of all time. (If you disagree, feel free to let us know in the comments … even though you are wrong.) It made Bruce Willis, previously a likable comedic actor on the TV show Moonlighting, into an international action-movie superstar. And it introduced Americans to Alan Rickman, who played the peerless villain Hans Gruber.

Anyway, we’ve seen it about 600 million times. And these are the things we’ve learned.

2. The black guy not only doesn’t die first — he doesn’t die at all! Which is a big loose thread, come to think of it.

3. Always put on your shoes before running away from terrorists.

4. Saving your estranged wife from a bunch of killers is a pretty good way to get the marriage back on track.

5. Huey Lewis is an underrated actor.

8. They’re shooting at the lights.

9. In the end, all you really need to defeat bad guys is a couple of bullets, some duct tape, and an infectious laugh. 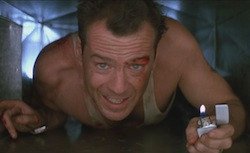 10. Air ducts? Kinda cozy … assuming no one is riddling them with bullets.

12. The LAPD has no idea what it’s doing (aside from Officer Carl Winslow, that is).

14. Don’t kill a terrorist’s brother and expect to get away with it.

16. Teddy bears can be total dicks.

17. “Take the express elevator. Get off where you hear the noise” are not adequate directions to a party in a high-rise.

19. Never, ever say “You’re just going to have to kill me!” to a terrorist holding a gun.

20. We’d tip a limo driver an extra 10 percent simply for being named Argyle.

21. Being in Philadelphia is preferable to having several large shards of glass embedded in your bare feet. But just barely.

23. Always keep your eye on the detonators.

24. Even an international terrorist facing the onslaught of a police SWAT team can’t resist the delicious, satisfying taste of a Snickers bar!

25. “Yippee ki yay, Mr. Falcon!” would have been a much better line. Eh, maybe they’ll use it in the sequel.