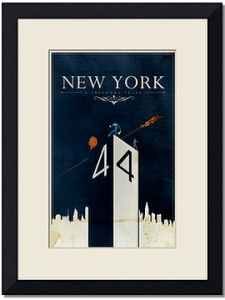 Even if you’re a bachelor, you need more on your walls than just battered posters leftover from college or spaghetti you hurled across the room because Felix was being annoying. The logical choice for a classy adult such as yourself? Superhero posters, of course.

But not just any superhero posters. We’re talking about Justin Van Genderen’s amazingly rendered works of art. He’s taken nine superheros (well, maybe seven; one of them is Akira, and another is “Captain Britain” who obviously sounds lame as hell) and pictured them in their hometowns. The posters are a sort of cross between old art-deco travel posters and Russian Constructivist propaganda posters (there, now you can sound smart when a ladyfriend compliments your wall decorations). Prices vary depending on the size and quality of the prints, but start as low as $18. Check them out below. Spider-Man: We never approved of the way the movies changed the fictional Daily Bugle’s location to the actual Flatiron Building, but we gotta admit it works in this poster. Batman: Yes, according to this poster Batman is several stories tall. But who cares, it looks awesome.

What is the Seller Responsible For When Selling a House?