We weren’t sure what to think when this video was emailed to us. Would a guy actually be twisted enough to make his girlfriend believe she was watching him die as a result of his attempt to propose marriage to her?

The answer is: Yeah, of course — that’s hilarious! But it still didn’t convince us this was real. So we got in touch with the guy in the video, a professional stuntman named Josh Wood (he is real), and asked him a few questions.

Was that real? Did she really not know that was going to happen? Was she the only one who didn’t?
Yes, it was real. I had four stunt friends surrounding the bag. One of them handed me the sign as they all ducked out of sight. She had no idea that I was going to propose (we’ve talked marriage for awhile now), and certainly not that way.

Did you have any second thoughts about making your fiance think she’d just witnessed your grisly death? Did anyone tell you that it might be a bad idea?
Not even one. She’s seen me drop down an 80-foot waterfall in a kayak a few dozen times. This was right up our alley.

We don’t see her getting pissed in the video. But she must have gotten pissed.
I took her skydiving on our first anniversary, white water rafting on our second, and racing cars on our third. I love scaring her. For a proposal I figured it would be best to let her think I was the only one likely to be killed in some horrible way.

Will she get you back in some way?
She already has, and I’m not comfortable telling you how.

Well, now we can’t wait to try our Russian Roulette proposal idea on some lucky lady! That said, we’re still not convinced this is real. (We think it’s a commercial for Neuro; everyone is drinking one all the time.) What do you think? 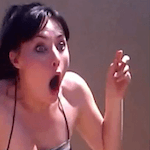 Why Does Smiling Make Men More Attractive As Husbands?

Should You Do a Background Check Before Getting Married?