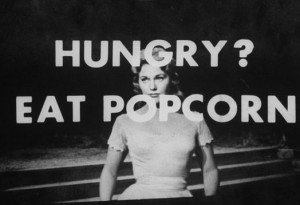 MYTH #6: Subliminal messages work on your brain without you knowing it
In 1957, market researcher James Vicary inserted messages urging moviegoers to purchase soda and popcorn into showings of a film in New Jersey. Even though the messages appeared for no longer than 1/300 of a second, Vicary reported that Coca-Cola and popcorn sales increased to the tune of 18 percent and 57 percent, respectively. The problem? Years later, Vicary admitted that he lied. Subsequent studies, including one based on the 1990 Judas Priest trial, in which the suicides of two teenagers were blamed on subliminal messages in the band’s lyrics, all concluded that no scientific evidence existed to support subliminal messages influence behavior.