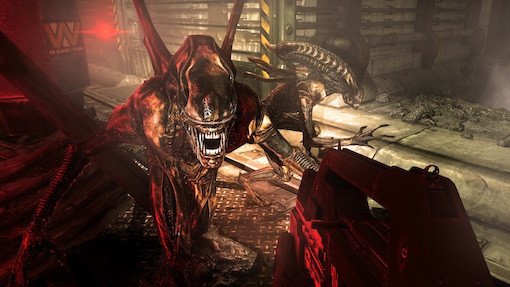 In space, no one can hear you scream. Your basement, however, is a different story. And two new space-based first-person shooters aim to make you scream with fear and/or delight.

Made by Gearbox — the people behind the Borderlands games — Aliens: Colonial Marines (360, PS3, PC) takes place shortly after the events of James Cameron’s classic 1986 sci-fi action flick Aliens. You’re a — you guessed it — colonial marine sent to investigate what happened onboard the Sulaco and at the colony on LV-426. In so doing, you take on a ton of space bugs … as well as some other things that are almost as creepy.

Sadly, Colonial Marines, which took a whopping six years to make, feels a little too basic. There’s little exploration to be done, and you can’t really improve your character’s skills. Instead, you just run from one gunfight to the next, shooting enemies who don’t even bother to try not to get shot. The game also lacks the smooth, invigorating, cinematic gameplay of a Call of Duty installment. Anyone who owns every Aliens film on Blu-ray will no doubt be happy to disembark on the Sulaco and start emptying a pulse rifle into Xenomorphs. (That’s what the aliens are called, noob.) But others may want to stay away.

The Aliens movies are a big influence on Dead Space 3 (360, PS3, PC) and the two games in the franchise that came before it — all of them third-person sci-fi shooters in which you try to survive an influx of space zombies who need to be dismembered to be stopped. In the third installment, the zombies relentlessly follow you from your crappy apartment to some derelict space ships and, finally, to a Hoth-like frozen world. Like Colonial Marines, Dead Space 3 isn’t as deep as it could be, especially when compared to the original; it’s neither as scary (though it has its spooks) nor as full of difficult situational puzzles. But it does have the same great fighting controls, twisted enemies, and explosive moments that have made Dead Space one of the best shooter series of this generation.