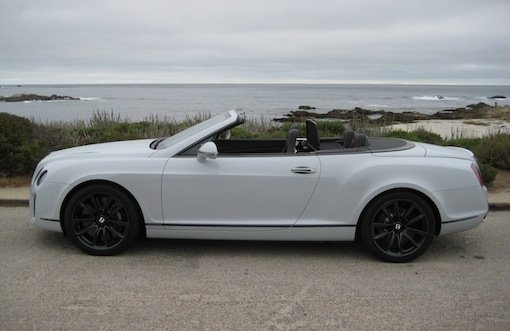 The Supersports is the world’s fastest four-seat convertible. That means rocketing 140 mph down Northern California’s otherwise serene coast seems perfectly reasonable, despite the terrified beach goers. And whipping the 5,269 lb. beast around scenic lookouts hundreds of feet above the Pacific Ocean is of no concern, despite the startled tourists. And cranking Molly Hatchet on the 1,100-watt Naim stereo system strikes me as an excellent idea, despite the fact that cranking Molly Hatchet is often anything but.

Speaking of flirtin’ with disaster, simply unleashing the Supersports’ raw power (6.0-liter, 621 hp twin-turbo W12; 590 lb.-ft. of torque; 0 to 60 mph in 3.9 seconds) would no doubt result in me slamming into the Pacific Ocean at terminal velocity. Luckily, those daunting specs are complemented by a host of life-saving refinements. For starters, the Supersports has a lower stance and is almost 200 lbs. lighter than its convertible cousin, the GTC Speed. The suspension is automatically and continuously adjusted according to road conditions — the driver can also control it — and mashing the brakes at any halfway reasonable speed is drama-free thanks to gigantic (16.5 inches in front) carbon-ceramic stoppers.

And unlike many cars with seemingly endless reserves of power, the Bentley doesn’t protest when kept at a steady 20 mph — a speed at which the top can still be put up or down in a little less than half a minute — though it does seem to perform better and better as the speedometer shoots upward. That process is hastened thanks to acceleration controlled by a six-speed tranny requiring less than 100 milliseconds to upshift.