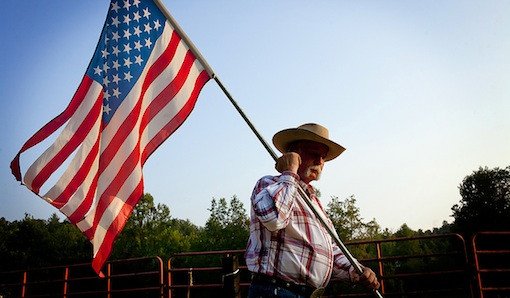 According to the L.A. Times, the White House has received separate online petitions from all 50 states to secede from the Union. And the petition with by far the most signatures is for the state with a history of patriotisming the hardest while complaining about being a member of the Union the most: Texas!

Can states secede from the Union? Well, for their part, Texans have flirted with the romantic idea of independence since the 1800s. After breaking away from Mexico, Texas was its own rollicking independent republic for almost a decade, from 1836 to 1845. That makes it the only U.S. state to enter the Union after being its own independent country. So maybe it’s no surprise that its petition to secede from the United States currently has more than 100,000 signatures.

But we should put that in perspective: An online petition urging Macy’s to stop carrying apparel made by American treasure Donald Trump has almost 600,000 signatures. Plus, that petition might actually achieve something. 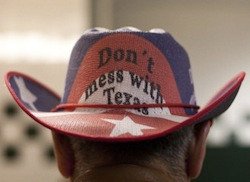 Texans who argue for independence may not be entirely wacko. The state has enjoyed a population boom, a low cost of living, and high oil prices, meaning its economy has weathered the recession better than most. Texas also is home to several Fortune 500 companies and a myriad of robust industries, so to some it may look good on paper as an economy unto itself.

But Texas also likes to accept money from the Federal government. The state has been enduring an unprecedented drought that has decimated farmers and ranchers, and Federal funds have been helping the state cope. In fact, Texas accepted $24 billion in Federal stimulus money. And this is to say nothing of all the military bases in Texas, which employ a couple hundred thousand people.

But none of that really matters, because all of those petitions don’t mean anything. You could go start a petition right now urging that Texan secessionists be forced to replace their cowboy boots with ballet slippers as punishment for their behavior. Sadly, no matter how many signatures a petition like that got, nothing would happen.

“In my view, there is zero chance that this could be legally binding,” says James Henson, director of the Texas Politics Project at The University of Texas at Austin. “The issue of national citizenship vis-a-vis the states was settled by the Civil War and the prevailing interpretation of the 14th Amendment. The petition is political expression — it has no consequence for policy or the legal status of Texas in the United States.”

According to the 14th Amendment, “No State shall make or enforce any law which shall abridge the privileges or immunities of citizens of the United States.” In other words, states can’t secede because they can’t take away residents’ U.S. citizenship.

When you are willing to invest your money in the market, you may find many options. However,...