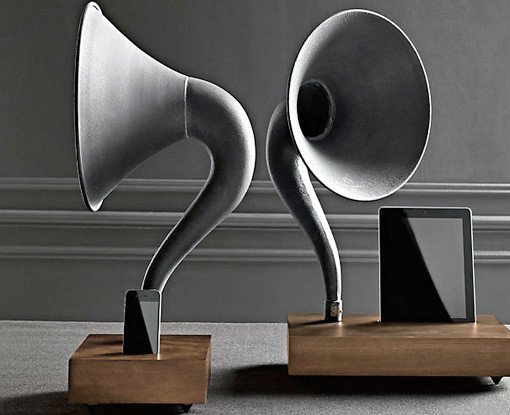 iPhones and iPads are great because they double as MP3 players, but their speakers make for terrible boomboxes — which means that when you and your buddies want to Hammer Dance to Miley Cyrus, you need something that’ll boost the sound. Bluetooth speakers are a great option, but eventually they need to be recharged. That in all honesty isn’t typically a big problem, but wouldn’t it be great if technology reached a point at which a speaker never needed to be recharged?

Well, it has. Or to be more precise, it did — more than 100 years ago. The iPhone Gramophone ($250) and iPad Gramophone ($300) look like vintage pieces because they’re based on old phonographs that originally became popular in the 19th century. Using the same concept as Thomas Edison’s phonograph — the dude who invented the light bulb and motion-picture camera — the Gramophones simply require you to place your iPhone or iPad into the dock and hit play. The Gramophones’ horn, which is made of iron and brass, then amplifies the sound by three or four times. That’s loud enough for even Grandpa to hear.