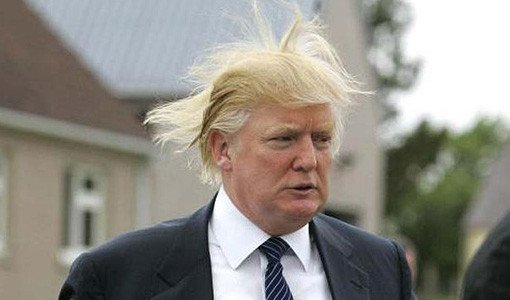 Reality TV host, fake political candidate, and folicular illusionist Donald Trump has revealed his “October Surprise” regarding President Obama. What was the bombshell he hyped like a besuited carnival barker? Well, believe it or not, it turns out that Obama … actually, there wasn’t any bombshell. Nope, the ginger bullshitter just wanted to froth up birther rage by pretending he’d donate $5 million to the charity of Obama’s choice if the President releases his college records and passport application.

Sadly, that was by far the least interesting thing Trump could have announced. In fact, if he just wanted his name in the headlines — which he did — he should have ignored Obama altogether and instead focused on the man with whom Trump is most fascinated: himself. Just take a look at a few facts our crack team of researchers uncovered about the Donald …

• That’s his real hair. It’s his beautifully manicured fingernails that are fake.

• The only things Trump actually owns? A Subway franchise in Newark, a few dozen Van Heusen ties, and a 1989 Buick LeSabre.

• Trump and Newt Gingrich once bathed together, though no funny stuff went on.

• Thanks to an excellent tailor and careful lighting, few people know that Trump currently weighs more than 450 lbs.

• He still suspects the Matrix might be a real thing.

• Trump was the model upon which the aliens were based in John Carpenter’s 1988 science-fiction / horror film, They Live.

• He really likes America, but he’s not sure he can say that he loves America.