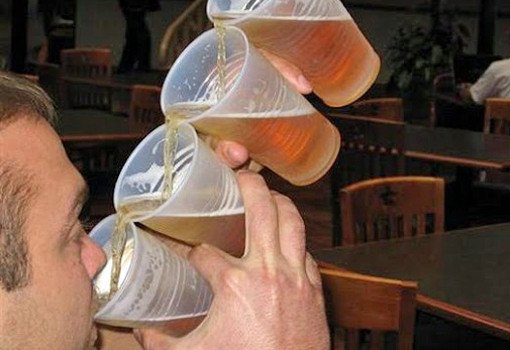 If you’re called out for ripping one too many beer bongs at your office holiday party this year, simply explain to your boss and co-workers — without slurring, if possible — that it’s part of your strategy for staying healthy over the course of the winter A 2012 study performed by Sapporo, Japan’s oldest brewery, determined that humulone, a chemical compound in hops (a key ingredient in beer), helps combat a virus that causes pneumonia and bronchitis in infants, and suppresses the sniffles in adults.

The catch? If you want to reap humulone’s rewards from beer, you need to fully dedicate yourself to the cause. Beer contains such a meager amount of humulone that you’d need to consume thirty 12 oz. cans to tap into its virus-fighting abilities. And since babies can’t drink beer — we blame Obamacare — scientists are trying to figure out a better (and legal-er) method for kids to consume humulone. Might we suggest light beer? That said, if you want to go for it, here’s what a researcher from Sapporo told Time:

You’d need to drink 30 12-oz. cans of beer in order for there to be any effect — about 4,500 calories‘ worth and enough alcohol to make a cold the least of your worries.

If you’re not looking to take on that many calories, other things you can do to avoid catching colds are to avoid putting your hands in your eyes or mouth, washing them frequently (NOT with antibacterial soap), get a flu shot, stay hydrated and feast on plenty of plants, which contain phytonutrients that support the immune system.

Don’t fall into the trap of believing any myths about catching a cold, such as trying to sweat or starve a cold (you’ll just end up wet and hungry), or downing pints of orange juice. While vitamin C is too to help prevent wrinkles and lessen the risk of heart disease, it’s never been proven to fight colds. Plus, OJ is loaded with sugar.