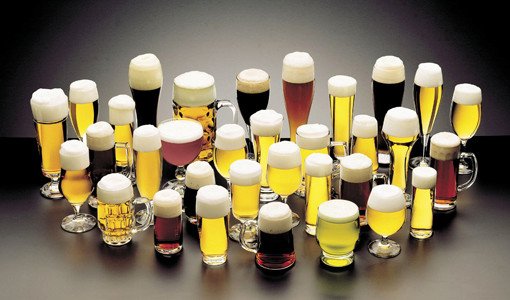 How many kinds of beer are there? Give or take, there are approximately a whole bunch. Here’s an idea of why: In the U.S. alone, there are 2,000 craft breweries cranking out kegs of their own microbrews. And since a beer is defined not only by its ingredients, brewing process, and physical properties, but also by its place of origin … well, that’s a massive number of possible beer varieties.

As a guy, you’re “supposed” to know a thing or two about beer. But if you go on and on about beer minutiae, no one is going to want to drink with you. So we’ve created a casual, 5-minute beer primer divided into ales and lagers: Ales are made with “top fermenting yeast” strains and therefore have fruitier, more complex tastes. Lagers, which are made with “bottom fermenting yeast” strains and are brewed at colder temperatures than ales, have a cleaner, crisper taste. We also consulted beer connoisseur Carlos Duran, owner of Miami bar Cervezas, which stocks 350 different beers. So drink up (this valuable beer information)!

Barleywine
This high-alcohol-content beer probably isn’t for everyone. But certain beer geeks love it. “It has the tendency to have a sweet aftertaste,” Duran says. “It ranges from a little bit bitter to a little sweet, and is very complex.”
Delicious example: Dogfish Head Olde School

Pale Ale
Yes, this popular brew is relatively pale, but not as pale as you might think — it typically is a golden to medium amber. “It’s a bitter beer, with a hoppier taste,” Duran explains, meaning you can taste the grassy, earthy, spicy, or bitter flavor of the hops that go into brewing the beer. “The alcohol content usually ranges between 7 percent and 10 percent. It’s a style that a lot of people enjoy.”
Delicious example: Tailgate IPA

Brown Ale
As you may have guessed, brown ale is brown. But it’s medium-bodied — body is the name given to how heavy a beer feels in your mouth — which means it’s a good way to start trying darker beers. “It tastes nutty, like toast and coffee and chocolate,” Duran says. “It’s not as strong tasting as a stout, but it’s on your way there.”
Delicious example: Samuel Smith’s Nut Brown Ale

Porter
Now you’re even further on your way to stouts. Porters are darker than brown ales, but not black. “They’re similar in taste to brown ales, but are brewed with more roasted malt, which makes them taste similar — but stronger.”
Delicious example: Gonzo Imperial Porter from The Flying Dog Brewery

Stout
Stouts tend to be higher-alcohol beers, and very rich. “They’re sometimes aged in whiskey barrels,” Duran tells us. “So you’ll get hints of the alcohol they’re aged in. A stout and a cigar are a great combination.”
Delicious example: Cigar City Brewing’s Marshall Zukhov’s Imperial Stout

Wheat Beer
They’re brewed with — you guessed it — a larger amount of wheat, run the gamut in terms of color, but are generally fruity and spicy. The best-known example here in the state is probably a hefeweizen, which in German means yeast-wheat. “There’s usually not too much alcohol in wheat beers, so you can drink them at the pool or the beach,” Duran says. He means without passing out and drowning.
Delicious example: Franziskaner Hefe Weisse Hell