Admittedly we learned most of our drinking games in high school and college. So, years ago. And now that we’re no longer in school, the eight years we spent enriching our minds has removed us from playing drinking games every weekend.

That said, while our competitive drinking side has diminished, it hasn’t vanished. And when we play we usually fall back on the easier and fun ones that require little to no learning curve, such as Circle of Death.

It’s similar to Kings. In fact, it’s basically the same goddamn card game. The difference is the rules and what you assign the cards. If someone really cares and puts up a fight, they’re assholes. Why do you even hang out with them?

Otherwise,  players are required to draw a card and act according to the rules associated with that card.

All you need to play is

Players sit in a circle with a cup of beer – often gross or super strong beer — in the middle of the circle. The deck of cards gets spread around the cup in a circle face-down. Someone begins the game by picking a card from the pile and turns continue counter-clockwise around the table. 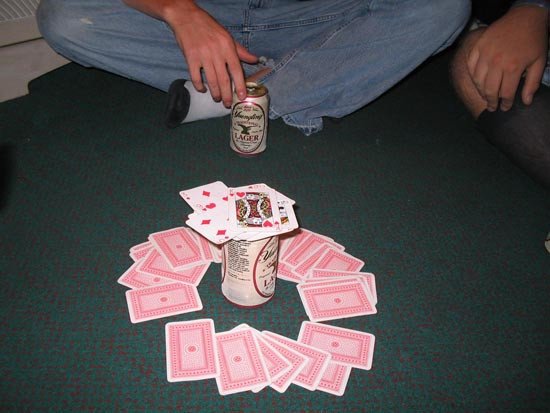 Each player draws a card and then executes the action associated with the card they selected. Here are the card rules:

The game stops when all the cards are drawn. If you didn’t puke from drinking the middle cup, play again.

House rules apply, so consider these if you’re hosting and playing Circle of Death:

Good luck and read this to deal with your hangover at work tomorrow.