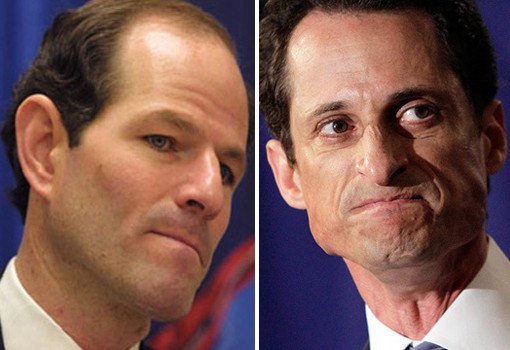 Anthony Weiner and Eliot Spitzer aren’t just forever linked because they were once young, rising New York politicians. They’re linked because of what they did with their dicks. Ex-Congressman Weiner was busted for tweeting pics of his package and shaved, chiseled chest to a college student who wasn’t his wife. Also, he tried to lie about it after he was caught, but he eventually resigned. Ex-Governor Spitzer shelled out an estimated $15,000 for high-end hookers over a six-month period, then resigned when he was caught.

So how the hell are these disgraced politicians looking to win over voters after they were forced to vacate their former positions of power? By coming clean about their misdeeds on the daytime TV circuit — which so far has included a fantastic near tear-up from Spitzer — and praying people forget they acted like scumbags. (We say that not because of the sexual stuff — we don’t judge them for that — but because of the lying and the hypocrisy.)

So does Weiner or Spitzer have a better shot at winning his race? Well, we ran the numbers — uh, figuratively speaking, of course — and came up with an answer …