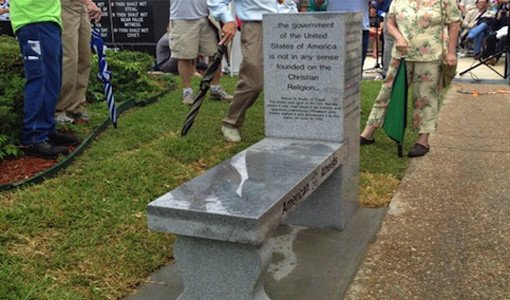 The nation’s first atheist monument to be placed on government property has found its home in — where else? — Florida. And lo, it is truly a magnificent sight to behold! Okay, not really. It’s just a 1,500 lb. granite bench littered with quotes about how religion has no part in government. A perfectly valid point, but c’mon, atheists — there’s no seat cushion or backrest? Sitting on the bench is gonna make everyone’s ass hurt like hell.

About 300 people showed up in Bradford County to see  an organization called American Atheists unveil their bench, which sits a few feet away from a monument to the 10 Commandments. The bench was the result of a suit A.A. filed — wait, is that really something they call themselves? — to get the 10 Commandments monument taken down, arguing that it violated the separation of church and state. The county ruled that the monument would stay, but that the atheists could erect their own, and … Jesus Christ, can we just agree that no monuments whatsoever are allowed outside courthouses so we don’t keep spending taxpayer money on lawsuits like this?

Anyway, the folks at A.A. are saying it’s a victory for free speech and insist this is the first of many benches … er, monuments to atheism that will find a home on U.S. government property. Religious types aren’t super enthused about that, but we don’t understand why — after all, it must be god’s will, right?