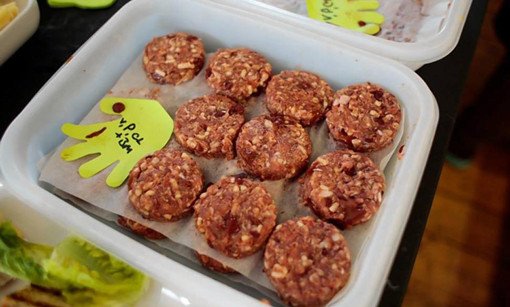 It used to be you had to be stranded or a raging psychopath to want to taste human flesh. Oh how the times have changed.

British chef James Thomlinson did a bunch of research and then got a med student to fork over some flesh to taste. The verdict: Human flesh tastes like veal. Thomlinson then mashed bits of veal, chicken livers, bone marrow, and pork into a burger in order to mimic the taste of human meat.

Thomlinson plans to release the new “cannibal burger” the same day the fifth season of The Walking Dead airs in the UK. And while it may sound gross, Thomlinson swears his burger is “to die for.” Okay, he didn’t say that, and it was a shitty joke. Please accept our apologies. And in all seriousness — human meat-flavored or not — from the photo, this burger looks like a cow turd. Bon appétit.