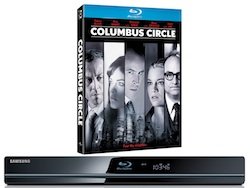 Living in a luxury high-rise apartment overlooking New York City’s Columbus Circle would be nice … but you’d still want to leave the apartment every now and then. In the movie Columbus Circle, however, the reclusive Abigail (Selma Blair), who suffers from crippling agoraphobia, hasn’t left her apartment for more than a decade. Then an unsolved murder and various nefarious plots change all that.

The thriller, which just came out on DVD and Blu-Ray, boasts an amazing cast including Blair, Giovanni Ribisi, Jason Lee, and Amy Smart. To celebrate its release, we’re giving two winners a Samsung Blu-ray player along with Blu-ray copies of Columbus Circle, Fast Five, Cowboys & Aliens, and The Change-Up. Here’s all you have to do to win:

Step 2: In the comments section of this story (below), answer this question: What’s your biggest phobia and why?